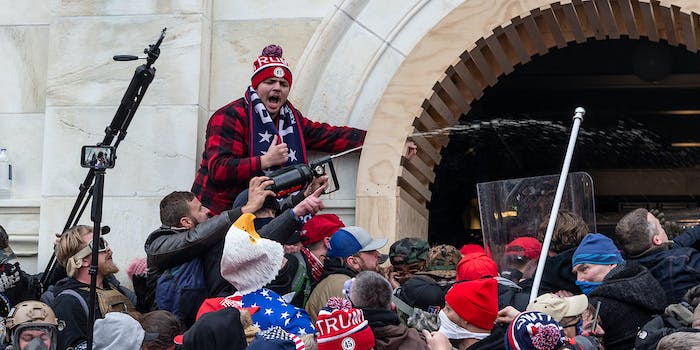 The discussions were held on the TheDonald.win forum.

Supporters of former President Donald Trump discussed executing members of Congress just weeks before the riot at the Capitol.

In discussions on TheDonald.win forum, according to a new report provided to the Washington Post, members debated the best method for building a gallows and how many nooses might be needed.

Others argued instead that a guillotine would showcase better symbolism, but lamented over the likely difficulties in transporting such a large blade.

The comments are raising serious questions about the intelligence failures of law enforcement in the lead up to the failed insurrection.

Although TheDonald.Win is no longer online, cached versions of the comments were collected in a 145-page report by the nonpartisan research group Advance Democracy.

Daniel J. Jones, a former FBI analyst and former Senate investigator, told the Post that the report shows just how central of a role the now-defunct forum played in the attack on Jan. 6.

“The website, TheDonald, played a far more central role in the January 6th Capitol insurrection than was previously known,” Jones said. “There are thousands of posts—with tens of thousands of comments—detailing plans to travel to Washington and engage in violence against the U.S. Capitol. The ultimate end goal of this violence was, on behalf of Trump, disrupt the Congress and overturn the presidential election.”

The report notes that the comments came not long after then-President Donald Trump, who repeatedly helped spread false allegations of widespread voter fraud amid the 2020 election, announced plans to hold a protest in Washington, D.C.

The discussions on the forum also referenced travel tips and advice on how much ammunition to bring in the event that a gun battle battle broke up. Other users, concerned about the city’s strict gun laws, inquired about the legality of bringing weapons such as stun guns and small knives.

One thread included diagrams of the tunnel systems beneath the Capitol as well as comments on the possibility of creating a “wall of death” to force law enforcement to retreat.

“Cops don’t have ‘standing’ if they are laying on the ground in a pool of their own blood,” one user wrote.

What effect the new report will have on investigations into the Capitol attack remains to be seen. TheDonald.win was shut down by its owners following the siege, which left a total of five people dead.