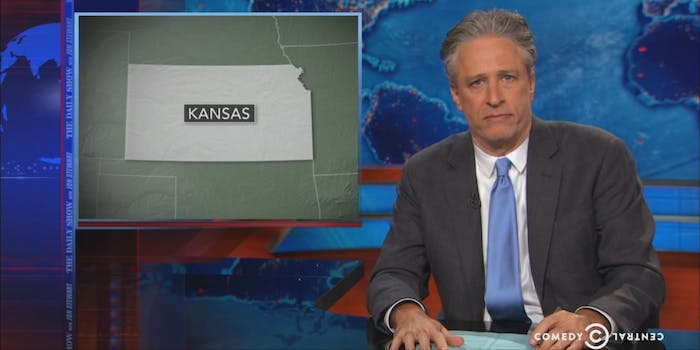 Jon Stewart loves to expose the hypocrisy and ludicrousness that characterize so many U.S. states, and in recent weeks, Kansas has made itself a prime target for the Daily Show host’s ire.

The latest national embarrassment from the Sunflower State comes courtesy of Kansas Gov. Sam Brownback (R), who recently signed a bill eliminating the requirement that Kansans take eight hours of gun-safety training to qualify for a concealed-carry permit.

“The same state that believes eight hours of gun training is too much for its gun owners requires a thousand hours of training for its professional aesthetician,” Stewart said, showing a certification document for the profession.

But Gov. Brownback isn’t just creating a lawless paradise for trigger-happy vigilantes. He’s also slashing welfare benefits, imposing harsh new requirements on poor people. As Stewart points out, Kansas’ own dependence on federal aid money—taking in $1.29 for every $1 that its residents contribute in federal taxes—makes it something of a welfare queen itself.

Given that Kansas is mooching on the federal-aid dole, Stewart suggests some harsh penalties for the state, like eliminating its heavily subsidized sports teams and the “extravagant right angles” of its borders.

“These rules may feel petty and unnecessary and quite frankly insulting,” Stewart tells Kansas, “but maybe they’ll motivate you to escape your culture of federal dependency.”