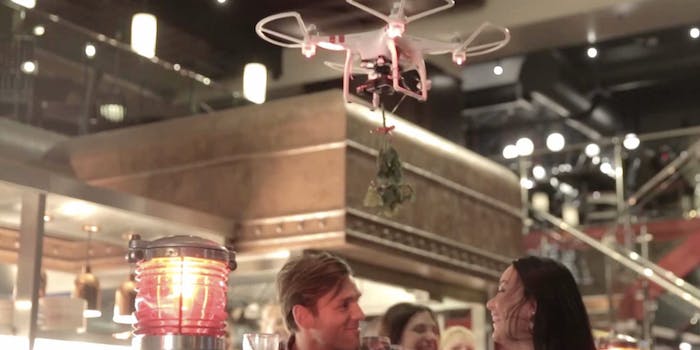 TGI Friday’s spices up the holidays with mistletoe drones

A gimmick to bring out everyone's inner Scrooge.

Just picture it: early December, first blizzard of the season. You’re cuddling with your soul mate in a booth at a casual dining restaurant, about to enjoy a dinner of spaghetti alfredo with chicken tenders in it. All of a sudden, a loud buzzing fills the air. You look up and spot a sprig of a poisonous plant dangling over your food, attached to a hovering quadcopter.

This is an order to kiss.

Yes, TGI Friday’s has announced that it is rolling out camera-equipped mistletoe drones in its U.K. stores for the holiday season, starting with a central Manchester location. Because if there’s one thing drones are better at than killing people, it’s pressuring them to snog.

We’re known for legendary celebrations at Fridays, so we wanted to see how we could make Christmas get-togethers in our restaurants even more entertaining, and offer guests the encouragement they need to make their move. Our mistletoe drones are the perfect way to do this. Not only are they great fun for the entire restaurant, but they help people get a little closer at this time of the year.

“Who knows—maybe we’ll have had our first mistletoe drone wedding by this time next year,” Waller added by way of chilling premonition. More likely, however, TGI Friday’s has simply escalated the franchise-eatery arms race. You think Applebee’s isn’t developing gingerbread smart bombs right now? I had no idea you were so naïve.