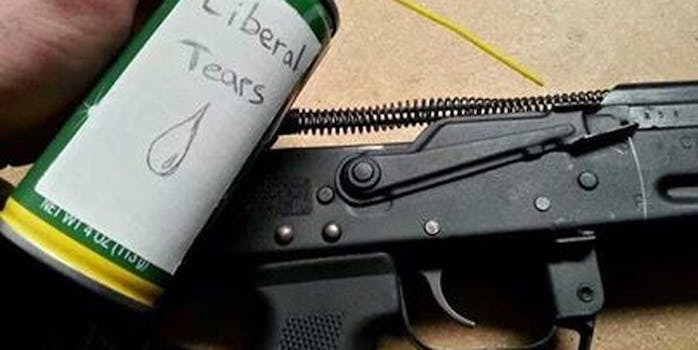 It looks like a conservative Texas Congressman know for trolling the Internet on gun rights had one more trick up his sleeve for 2013.

On Monday, a photo was posted to Republican Rep. Steve Stockman’s Twitter and Facebook accounts, showing a someone preparing to lubricate a AK-47 assault rifle with a can of WD-40 that had been relabeled “Liberal Tears.” The congressman tweeted the photo with the comment “The best gun lubricant around.”

Now for some context: this photo is being shared by a legislator who has previously used Twitter to raffle away an AR-15—the same weaponed used in the Sandy Hook Elementary School massacre. Stockman also received a lot of attention online for a campaign bumper sticker that read, “If babies had guns they wouldn’t be aborted!”

Stockman has also just announced a bid to unseat Texas GOP Sen. John Cornyn for being too “liberal.” According to the National Journal, Cornyn has the second most conservative voting record of any senator in the country.

At this point, it’s clear that Stockman gets a rise out of trolling liberals online (as well as an ego boost from 655 people who liked his photo).

Not everyone appreciated the photo of course.

“Last time I checked, tears, like the blood shed by all those who are grieved, don’t have any political affiliation,” wrote Steve Lachaga on the congressman’s Facebook page. “You are an embarrassment to the high office you hold.”

I stand by my assertion that Steve Stockman is a plant by John Cornyn to make him look sane. https://t.co/YBYhkoqnho

Correction: This story’s headline previously referred to Stockman as a Texas senator. He is a U.S. representative who plans to run for senator.