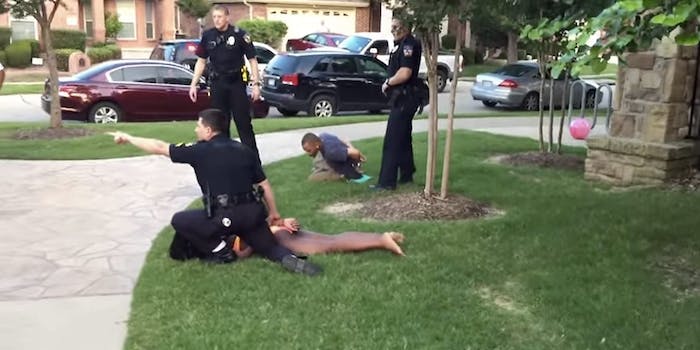 A young girl is seen being wrestled and pinned to the ground.

A video out of McKinney, Texas, shows a white police officer pointing his gun at a group of unarmed black teens, and the officer has been placed on administrative leave.

The video was uploaded to YouTube on Saturday by Brandon Brooks, who was present at the party. In the description, Brooks says there was a fight at the pool between a mother and daughter, and the police were called.

It appears that three white officers responded to the call, and everyone at the Craig Ranch North Community Pool panicked and ran. But the officers didn’t want to let them go and, according to Brooks, “just started putting everyone on the ground and in handcuffs for no reason.”

The climax of the video comes at the three-minute mark, when one of the officers wrestles and then pins a bikini-clad young girl to the ground. He gets up and draws his gun at a couple of boys trying to help her. Then he goes back to the girl, putting his knee on her back and handcuffing her for no evident reason.

On Sunday, Brooks, who is white, told BuzzFeed News, “I think a bunch of white parents were angry that a bunch of black kids who don’t live in the neighborhood were in the pool. Everyone who was getting put on the ground was black, Mexican, Arabic. [The cop] didn’t even look at me. It was kind of like I was invisible.”

The McKinney Police Department responded to the incident and the video, via Facebook.

At this time, the suspended officer has not been identified.

Update 6:31pm CT, June 7: McKinney Police Chief Greg Conley held a press conference today and addressed the June 5 incident, which involved a 14-year-old girl. He did not identify the officer on leave, but said they’re conducting a “complete and thorough investigation.”