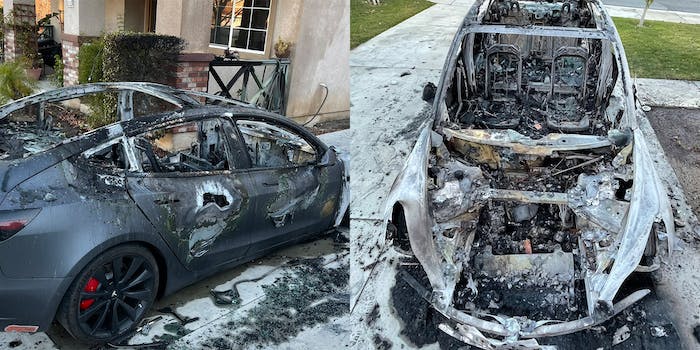 A Tesla owner claimed his car caught on fire while parked in his driveway.

After a Tesla owner’s car caught fire while parked in his driveway, he shared pictures of the wreckage in hopes of finally getting a response from the car company.

“I STILL believe Tesla makes great cars but their customer service is truly horrendous. Fifty-eight days since my car caught fire sitting in the drive, and Tesla doesn’t seem to care at all. ANSWER ME!!” @GUNMTLM3 tweeted.

Attached to the post were pictures of the car burned to the ground with only the metal frame left behind and a video from the neighbor’s security camera of the car igniting from across the street.

The owner also included a screenshot of the charge report of the Tesla from the night it burst into flames in Riverside, California providing even more evidence of the car’s position parked in his driveway.

As an avid fan of Tesla, the owner was shocked by the company’s unhelpful customer support in the face of such an alarming freak incident. He still seems to continues to support the car company on social media, though, sharing Tesla’s tweets and retweeting Tesla-related content even after the fire.

Many users on Twitter shared their thoughts on the owner’s approach to posting pictures of the damaged vehicle while still publicly supporting Tesla.

“So, are you going to buy another one, or what?” one user asked.

“As long as it’s not a safety concern I don’t see why not,” the owner replied. “I don’t think you understand my point, you expect me to never drive my other Tesla? Idc it caught fire, I JUST WANT TO KNOW WHY.”

The owner, who goes by Thor on Twitter, allegedly owns another Tesla Model X that did not catch fire, but fears driving it due to the unknown reason his Model 3 burned down.

“I know insurance will take care of it, but I also have an X and not knowing the cause of why the 3 caught fire makes you worry everytime you get in the car…” @GUNMTLM3 tweeted.

Other users were also conflicted over whether the owner’s insurance company should pay to fix the car or if the damages should be covered by the car manufacturer.

While some users were quick to jump in claiming the story was inconceivable, others agreed with the owner that Tesla’s customer service was so terrible.

Still, some were confused.

“After his car catches fire for no reason in his driveway, his complaint is with his customer service and not quality control?” another user asked.