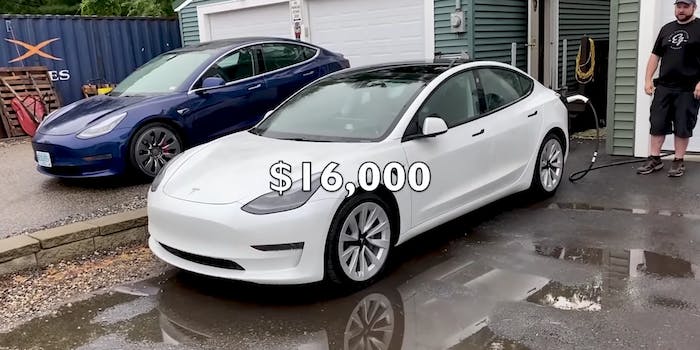 YouTuber fixes Tesla for $700 after automaker said repair would cost $16,000

The issue is being used to highlight the importance of right to repair.

A popular YouTuber was able to fix a damaged Tesla for just $700 after the automaker claimed the repair would cost $16,000.

Rich Benoit of the popular “Rick Rebuilds” YouTube channel uploaded video on Sunday detailing how his shop was able to fix a Tesla Model 3 that had damaged its battery pack after running over debris.

The car’s owner revealed specifically how the accident damaged a small part that connected a coolant line to the battery. After taking his vehicle to a Tesla service center, the owner was given a quote of $16,000 after being told that the entire battery would need replacing. Not only that, the owner’s insurance refused to cover the cost.

After speaking with fellow Tesla owners online, the car’s owner was told to reach out to Benoit. The YouTuber noted that he had come across the exact same repair issue before in other Teslas.

As noted by The Drive, Benoit and his team were able to fix the small part “using a brass fitting like you’d find at any home improvement store.” The $700 price tag, nearly 23 times less than Tesla’s estimate, was likely composed almost entirely of diagnostic and labor costs.

The Daily Dot reached out to Tesla to inquire about the video but did not receive a reply by press time. The non-response is unsurprising given that Tesla, who still advertises its press contact online, disbanded its public relations department last year.

Benoit argues that his customer’s issue highlights the importance of the Right to Repair movement, which argues that companies should not be allowed to bar their customers from fixing their own products.

President Joe Biden earlier this month signed an executive order codifying right to repair rules in an effort to promote competition within the U.S. economy.