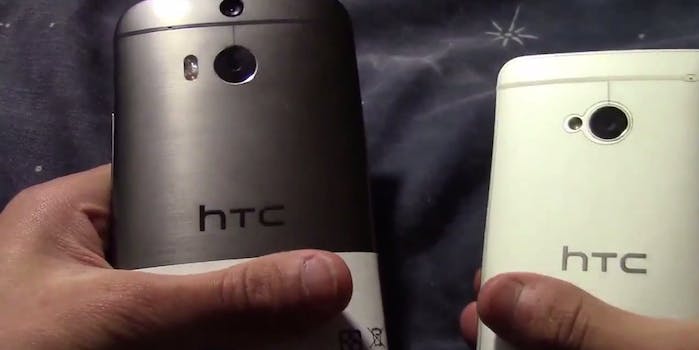 This teen uploaded a video of an upcoming HTC phone, and now he’s in big trouble

A video showing what looks like HTC’s upcoming One (M8) phone is making the rounds on YouTube. And the teenager who recorded it is in trouble.

“Do you want a little pot?”

In a shaky YouTube video, a teenage boy in slip-on sandals with socks creeps up to older people in a grocery store and makes them think he’s selling drugs. The people he talks to don’t know they’re being “pranked” and are on camera. Understandably, they are largely concerned that this kid is so flagrantly peddling illegal substances to strangers in public. It’s a string of awkward moments, with the kid feigning confusion about what is and is not appropriate to sell in a grocery store.

This is what happens in one of Roshan Jamkatel’s “pranking” videos, posted to YouTube. His videos show the teenager trying on a comedic persona that doesn’t fit him yet, straining for outrageousness.

Unfortunately for Jamkatel, their joke-loving son’s most outrageous Internet video isn’t part of his pranking series—but it certainly speaks to his ignorance of knowing what’s appropriate to film. Jamkatel recorded a 12-minute-long inspection of what looks like HTC’s upcoming One (M8), which is coming out March 25. The phone’s details aren’t supposed to be released yet, so this is a big deal for HTC. Jamkatel took the video down, but not before other people reposted it.

The video leak angered one Redditor so much that they doxxed Jamkatel and said there is a $10,000 bounty out on the phone.

Reddit deleted the post and banned the original poster, and it’s likely the bounty was entirely fabricated. But one thing’s clear: Jamkatel is in a lot of trouble.

The video hasn’t been officially confirmed as legitimate, but based on HTC’s response, it probably is. Jeff Gordon, an HTC communications executive, had a Twitter exchange with Jamkatel telling him the company will be in touch and that they have identifying information about the phone.

Those tweets were deleted, but Gordon and other HTC employees further discussed the incident on Twitter. Here are some HTC fans needling Gordon for being mean to Jamkatel:

@DimitrisAbr No one is bullying anyone! Thanks for your excitement–more will be revealed on March 25. :-) @JasonMacHTC

Gordon expressed sympathy for Jamkatel… but it’s likely HTC will be pursuing legal action. The Daily Dot reached out to HTC to find out what route they’re taking, but have not yet heard back.

Jamkatel first attempted to get the video taken down, but his video review had already spread around:

@thegooglefanboy you should be, delete all the videos please

@thegooglefanboy I never posted it

Obviously it was a boneheaded move to even record the video in the first place, but in this instance where it’s clearly just a mistake from an excited kid, it’d be nice to see HTC showing some compassion and letting Jamkatel and his family off easily.