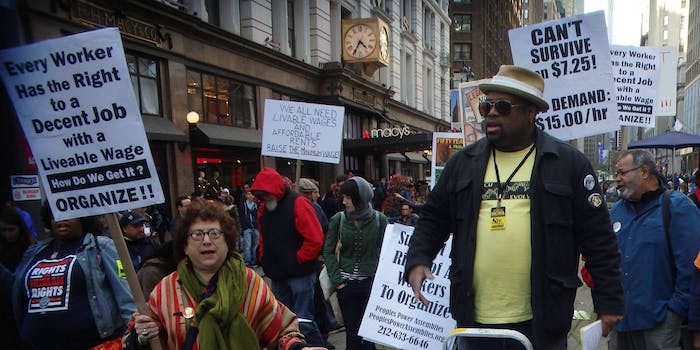 Ted Strickland spent a week simulating a minimum-wage lifestyle as part of the #LiveTheWage challenge.

Happy Meals and celery with peanut butter are not what most Americans would consider well-rounded meals, but these meager options are often the only ones available to the tens of millions of people who earn the federal minimum wage of $7.25 per hour. Former Ohio governor Ted Strickland experienced this firsthand when he spent a week simulating a minimum-wage lifestyle as part of the #LiveTheWage challenge last week.

Strickland tweeted a few pictures of his meals to give readers an indication of just how barebones minimum-wage eating can be. He also published an account of his week in Politico Magazine, in which he described walking to work to avoid paying for transportation. He said he counted himself lucky when he realized he already had cold medicine and didn’t need to budget for that expense.

Strickland’s budget for food and transportation was $77 for the week. When he wasn’t eating leftovers for lunch, Strickland said in his article, he usually went to McDonald’s, where the inexpensive but less-than-healthy proved to be a financial godsend. On July 23, for example, he ordered a McChicken and a side salad with ranch dressing, which cost him a total of $2.00.

“Today’s lunch came off the McDonalds dollar menu, where workers deserve a raise,” Strickland wrote, tweeting a photo of his meal.

“Because fresh fruits and vegetables are hard to find at a price within a minimum wage budget, I turned to bread, peanut butter, bananas and bologna more than anything else,” Strickland said in the Politico piece. “There were no big dinners or coffee stops on a whim.”

In the tweet below, Strickland shared a picture of his dinner on July 23: celery with peanut butter, bread, lettuce, a thin slice of cheese, an apple, and a glass of milk.

While Strickland didn’t have to worry about some expenses, like child care, his experience made him reflect on what it meant to pinch pennies while juggling competing responsibilities. He tweeted about child care in particular and noted that parents earning the minimum wage often faced an “impossible choice” with their kids.

When you make $7.25 an hour you’re faced with impossible choices: childcare or miss work? #LivetheWage http://t.co/gUiYhGqpnN