'He’s learned a lot in the past 40 years and he’s doing better now than he ever has before.'

Even though he hasn’t denied the allegations, presidential candidate Sen. Ted Cruz (R-Texas) probably isn’t the Zodiac Killer. For one, he’s too young—the serial killer committed his Northern California murders in the late ‘60s and early ‘70s, while Cruz wasn’t born until 1970 in Canada, eh.

Yet for Tim Faust, the man behind the Ted Cruz was the Zodiac Killer shirts, Cruz being “too young” and “not born yet” is the perfect alibi for the uncaptured felon.

“Let’s be realistic, the Zodiac Killer tops 37 people, and Ted Cruz has the blood of millions… on his hands [under his policies],” Faust told the Daily Dot. “He’s learned a lot in the past 40 years and he’s doing better now than he ever has before.”

On Feb. 18, Faust launched an online store selling shirts and bumper stickers promoting the conspiracy-meme regarding Cruz’s alleged murderous past. After paying artist Rory Blank and closing orders on March 2, Faust will donate all profits to West Fund, a nonprofit that helps make abortion accessible to the people of Southwest Texas.

“Cruz has always made me severely uncomfortable, and I’m afraid of him, and I’m also afraid of the Zodiac Killer,” Faust said. “The pieces kind of fit, you know?” 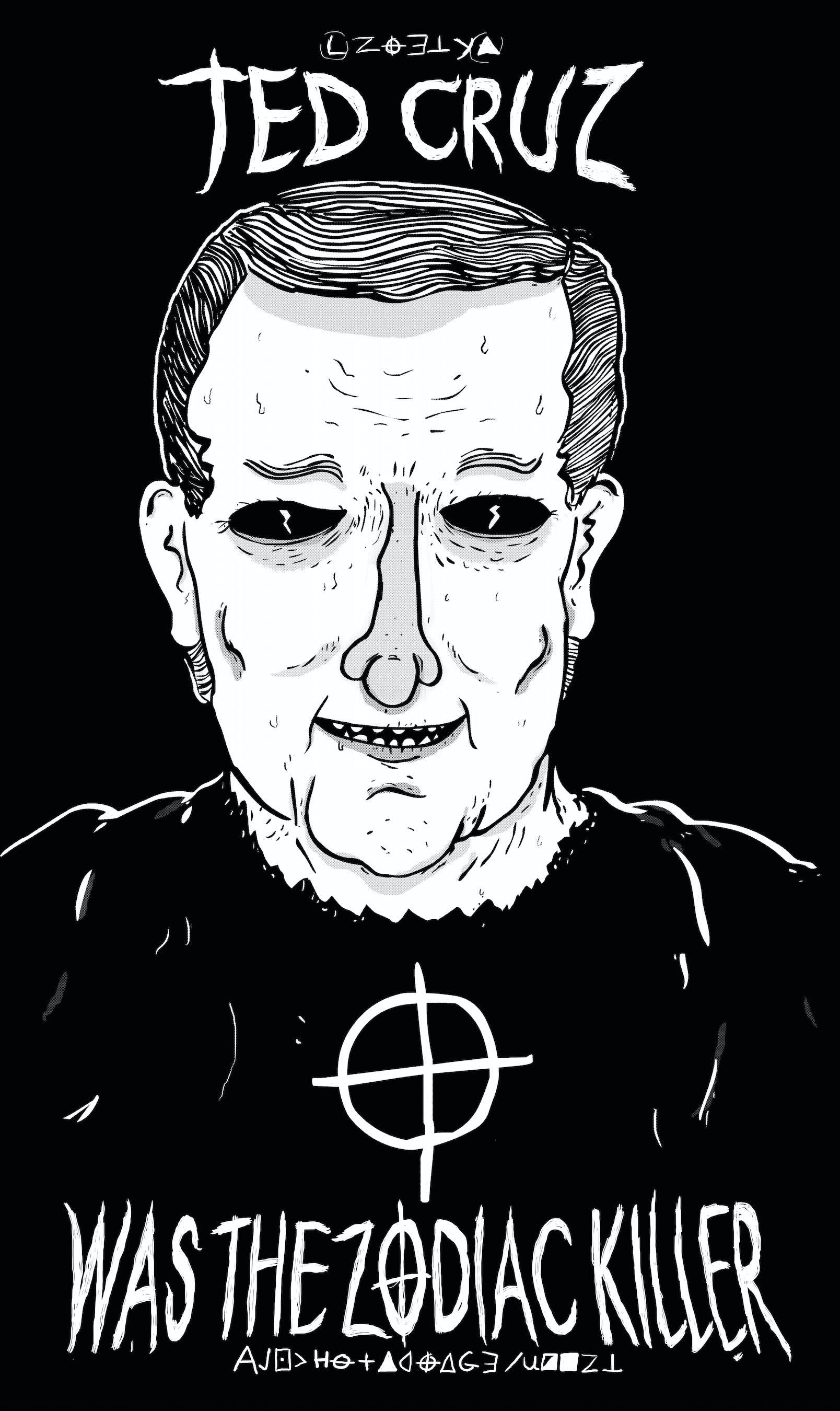 The idea for the shirts came to Faust a day prior to the online store going live. Faust, a reproductive rights activist and general manager of Party World Rasslin’ in Austin, Texas, was driving through traffic in the midst of juggling multiple projects at work, and thought to channel his stress into a side project.

In 2013, Faust photographed Cruz at a convention in Fort Worth, Texas. After seeing Cruz speak in person, Faust said it “kind of fucked [him] up for a couple of weeks… He’s a terrifying dude.” That year, Cruz supported Texas House Bill 2, which ramped up abortion regulations and closed 26 abortion clinics in Texas. With 10 abortion clinics remaining in six Texas cities, many people must travel several hours in order to have a safe abortion.

“To make somebody go to a court to get a permission slip, drive 400 miles, pay [$900] or [$1,000], then drive 400 miles back… that’s barbaric,” Faust said. “These [politicians] are so divorced from the actual issues they legislate upon that I think they’re ignorant of, or just don’t care about, the actual human cost in a naked bid for power, and nobody does that more ruthlessly than Ted Cruz.”

As a longtime loather of the Texas senator and his policies, Faust thought turning a bad joke into a profit for funding abortions would be a practical way to help people affected by his policies while also making Cruz break a sweat. After passing this idea to Blank, the artist drew up a sketch of the design, combining the Zodiac Killer sketch and the chilling, perfectly punchable features of Sen. Cruz.

“A person wakes up in the morning… and puts on the character of ‘politician,’ it’s a thing they’re performing,” Faust said. “Ted Cruz is playing a different kind of game… He does not care whether or not that you believe that he believes what he is saying… You can’t even hold him accountable to himself in that case.”

Though Faust’s original goal was to sell 20 shirts, the milestone was nearly passed in the first hour of the store being online. Sales suddenly took off the next day, after the killer Cruz shirts were featured on Jezebel.

To keep costs low and donated funds high, Faust is using a screenprinting company in Austin for the shirts, and has recruited volunteers to help bundle, package, and ship the orders. As of Friday evening, the online store has received 4,500 orders for just under 5,000 shirts, and an estimated $49,000 is set go to West Fund.

According to Faust, people receiving services through West Fund earn an average monthly income of $930. In 2013, the Texas Observer wrote that an abortion in Texas would cost somewhere between $450 and $3,000.

“I shouldn’t have to make a T-shirt [to get people to donate to West Fund], they should have federal funding but they don’t, so here’s the proxy,” Faust said. “Here’s my attempt at helping close that gap a little. Maybe 25 gals… can get abortions that they want, and that feels nice.”

Though Faust feels great that the shirts are getting national attention, he has no plans to continue selling them in Austin after he shuts down the site. While the donation pool continues to grow by the thousands, for Faust, a few T-shirts are no replacement for the work done by West Fund, Planned Parenthood, and other organizations helping women get safe abortions.

On March 2, the Supreme Court will hear arguments for Whole Woman’s Health v. Hellerstedt, where SCOTUS will decide if Texas abortion rules place an “undue burden” on a woman’s constitutional right to end a pregnancy.

“We’re just clowning around, but it highlights that there’s this problem, and if [Whole Woman’s Health v. Hellerstedt] is upheld in Supreme Court, which it might be, this problem persists,” Faust said. “It’s a nice way to take something you really care about, and the general futility you feel, and… throw a rock at it.”