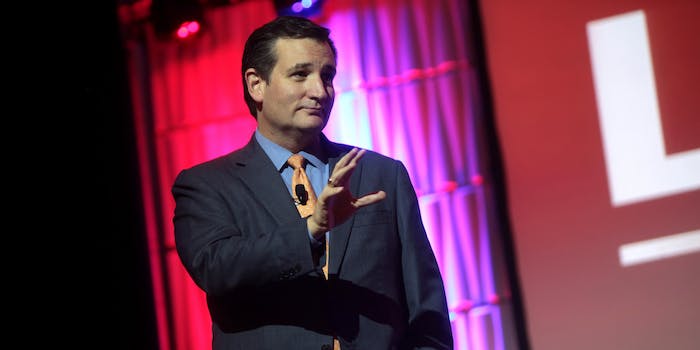 The Republican senator wants to prove he’s hip to the tech stuff.

When you’re an avowed opponent of net neutrality eyeing the White House in 2016, the best way to convince millennials that you’re on their side is by joining Vine. At least, that’s what Senator Ted Cruz (R-Texas) must think. His office launched his Vine account this morning with a six-second plea for leaving the Internet alone, and it’s exactly as simplistically obfuscatory as you’d expect.

Cruz made headlines when he railed against President Barack Obama‘s support for Title II regulation of the Internet. In slamming net neutrality as “Obamacare for the Internet,” Cruz either demonstrated his ignorance about how the Internet works or ignored his policy advisers in a craven bid for conservative plaudits.

Either way, the ridicule directed at Cruz for his net neutrality comments is likely to stick with him as he continues to address Internet policy issues in the coming years. With the 2016 presidential campaign approaching, Cruz will need all the social media distractions he can find to shrug off the perception that his technological knowledge is as archaic as his social values.

We’ve reached out to Senator Cruz’s office to ask why he chose to launch his Vine account now. We’ll update if we hear back.