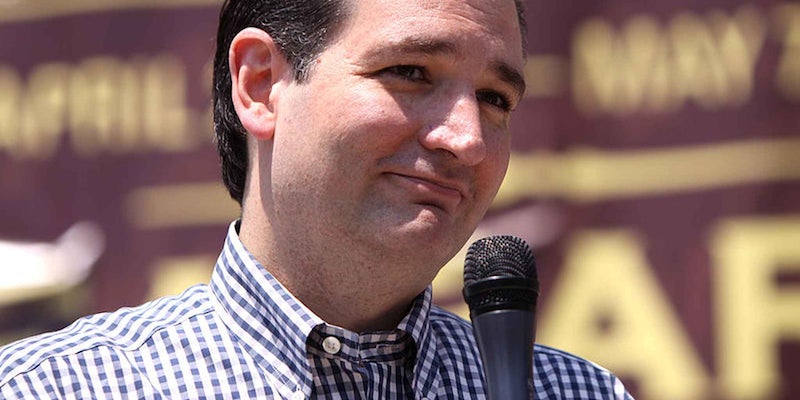 Texas Sen. Ted Cruz is not a fan of efforts to reform America’s campaign finance system.

Speaking on the floor of the Senate on Tuesday, Cruz charged that a proposed constitutional amendment about campaign finance could have the unintended consequence of criminalizing the type of political satire practiced on Saturday Night Live.

“Congress would have the power to make it a criminal offense, [SNL creator] Lorne Michaels could be put in jail under this amendment for making fun of any politician,” Cruz said, dropping into his own version of Dana Carvey’s iconic George H. W. impression. ‟That is extraordinary. It’s breathtaking, and it’s dangerous.”

The initiative Cruz is arguing against would give Congress the ability to “regulate the raising and spending of money and in-kind equivalents with respect to Federal elections.” It would similarly give states the ability to exert greater control over their own campaign finance laws.

The reason this effort is being pushed as a constitutional amendment is due to the Supreme Court’s recent interpretation of First Amendment free speech protections as allowing any individual or corporation to essentially contribute as much as they see fit to any political campaign. Guiding the court back to a more restrictive vision of campaign finance would require an constitutional alteration.

While Cruz could have picked any political satire show—from The Daily Show With Jon Stewart to Parks & Recreation, which regularly features active politicians like John McCain and Joe Biden—the SNL references were a pointed barb aimed at Sen. Al Franken, who was a cast member on the long-running variety program before being elected to the Senate and is one of the amendment’s most vocal backers—promoting the effort with an online petition hosted on his website.

The biggest hole in Cruz’s logic is the text of the amendment itself. The relatively succinct legislation only has four sections, the third of which reads, in its entirety:


Nothing in this article shall be construed to grant Congress the power to abridge the freedom of the press.


As part of the media-industrial complex, it would be difficult to argue that the political satire of SNL wouldn’t be exempted from whatever campaign finance restrictions would be imposed by various legislative bodies through the amendment due to its status as “press.” Where all of this could get tricky is how it’s applied to explicitly partisan, albeit supposedly journalistic, works like the anti-Hillary Clinton film that set off the whole Citizens United case, which created the need for this amendment in the first place.

Even so, it seems extremely unlikely that, if passed, the amendment would have any material effect on how shows like SNL do business. The Wire reports:


Richard Albert, an assistant professor at the Boston College School of Law, told The Wire that’s pretty unlikely. The bill as he read it referred to how people express their views (through money), not what those views are. “I don’t see this as being a content based bill,” he said.


Whatever happens to the amendment, one thing is certain: the American people aren’t happy with the nation’s current campaign finance system. In a poll conducted shortly after the Citizens United decision came down in 2010 and opened the floodgate for unlimited corporate contributions, more than 80 percent of respondents said they opposed the ruling—with that opposition cutting almost uniformly across party lines.

A procedural vote on the amendment is projected to occur on later this week, with Democrats largely expected to support it and with Republicans lining up in opposition.