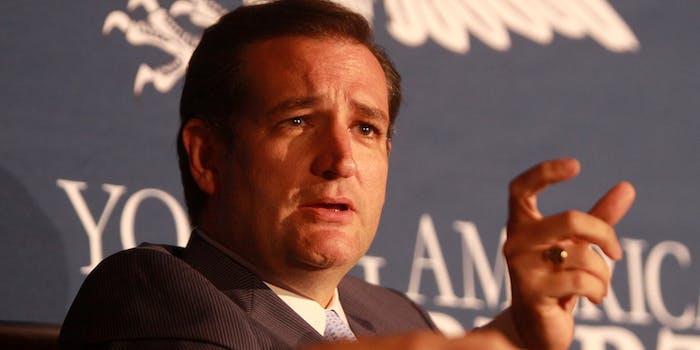 But Cruz is a buffoon, so naturally he's staying right where he is.

The 2016 presidential race is getting awfully crowded.

With three new entrants this week alone—Carly Fiorina, Mike Huckabee, and Ben Carson—that’s especially true on the Republican side of the contest.

Worry not, Jon Stewart has a plan: “Let’s get rid of Ted Cruz.”

Stewart followed up with a five minute game of find the hypocrisy.

When Sen. Cruz (R-Texas) said President Obama was divisive, Stewart played video of Cruz calling Democrats jihadists and extremists. When Cruz said Obama fundraised instead of governed, it was easy to guess where Cruz would be off to in the next clip.

Even among the people who don’t watch The Daily Show, crowd, Cruz is hurting quite a bit. He’s in fourth place in many Republican primary polls, placing him behind former Florida Gov. Jeb Bush, Sen. Rand Paul (R-Ky.), and Sen. Marco Rubio (R-Fla.). His numbers are down several points from this time last year, while his GOP competition is on the upswing.

In other words, Ted Cruz gets headlines, but can he get voters?

On prediction markets like PredictIt, Cruz is trailing even Mike Huckabee, whose candidacy is less than 24 hours old.

When Cruz’s biggest campaign accomplishment is running ahead of an undeclared Rick Perry, you know there’s some catching up to do.