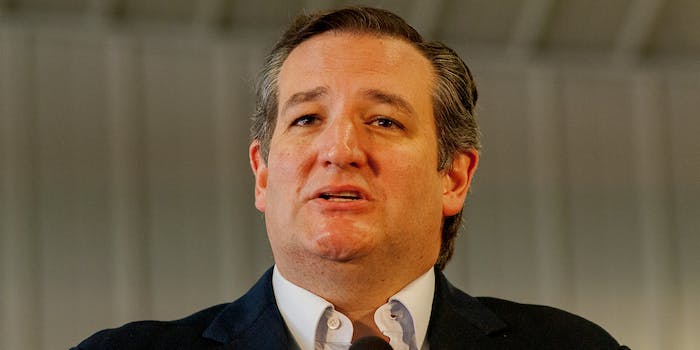 Is it actually a beard?

In the wake of his devastating loss to George Bush in the 2000 election, Al Gore departed the national scene, emerging months later with a beard.

That little bit of history repeated itself 18 years later, when, in the wake of his stunning defeat at the hands of upstart Beto O’Rourke for Senate in Texas, Ted Cruz departed from the national scene and emerged weeks later, with a beard.

You may have a couple questions. Questions like: “Wait, I thought Ted Cruz won?” and “Huh, what? Where’s the beard?”

The answers to those both are “who really knows?”

Maybe Ted Cruz did actually defeat O’Rourke in 2018, but then why would he go the route of many an ashamed man, men like Gore, and Ben Affleck and Michael Phelps and Mel Gibson, who after national friskings in the media, reemerged with scruff on their face in the hopes of feeling a bit more incognito.

Could it be that Cruz’s near defeat and constant series of missteps, self-owns, and desperate actions left him feeling like he’d lost something, and that he couldn’t show his face in public after debasing himself so greatly just to win re-election?

And maybe, maybe, maybe, whatever is on his face there constitutes a beard, in some understanding of facial hair somewhere off in another segment of the universe, where men have long ago lost the ability to grow beards and even the scantest sign of whiskers is worshipped as a sign of virality.

Ahhh, who the hell really cares, let’s look at some other people making fun of it.

"grew" is doing a lot of work here https://t.co/xEU8FVxkIo

No he absolutely did not. https://t.co/LQqrGxAGcq

The third seal has been broken. https://t.co/oo8BYG2sDW

near death experience will do strange things to a man https://t.co/zqPiQZZrwr

Loose definition of "beard," but okay sure https://t.co/9Qqobg9Yw9