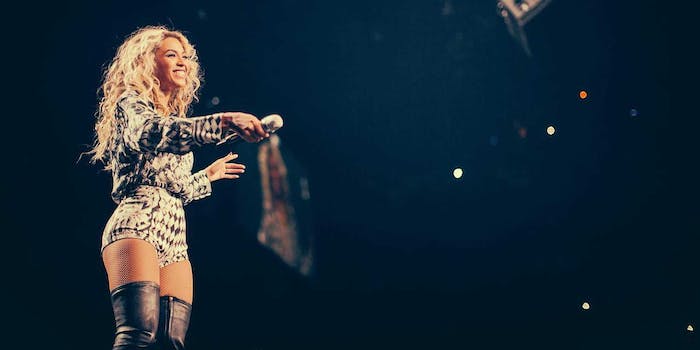 Beyoncé won't get any help from Target on her album sales.

Beyoncé, boss/diva/unicorn/divine creature, gave the entire world a happy surprise last week when she dropped her entirely unannounced album—with nothing more than an Instagram post. To say the anti-old media move was a success would be an understatement: since being released Friday morning, the album has sold more than 615,000 downloads in the U.S., and more than 820,000 worldwide.

And it’s not just your regular album: it’s being labeled a “visual” album, taking an innovative stab at recognizing Internet culture in all its forms.

It’s been a bona fide international success, but not everyone is thrilled with Queen Bey. Target has announced it will not be selling her album.

“At Target we focus on offering our guests a wide assortment of physical CDs and when a new album is available digitally before it is available physically, it impacts demand and sales projects,” a spokesperson tells us. “While there are many aspects that contribute to our approach and we have appreciated partnering with Beyoncé in the past, we are primarily focused on offering CDs that will be available in physical format at the same time as all other formats. At this time, Target will not be carrying Beyoncé’s new self-titled album ‘Beyoncé.’”

It’s an incredibly old school message coming from Target, a corporation increasingly aligning itself with startups and Internet culture. Next month, in fact, Target is planning to launch an accelerator program to further its presence in the digital age. It’s also been one of the most active and most positively-received brands on Twitter, Facebook, and Instagram. The company’s new app for secret sales, Cartwheel, was appropriately launched leading up to the Black Friday chaos. Clearly, Target has a finger on the connected pulse of consumers., so its frustration over Beyoncé’s digital-only album release seems like a mixed message. It’s making Target look like the old guy who was just exposed after dressing like a middle school all semester.

The “physical CDs are dead” cry was ringing long before Beyoncé took this unconventional route, and the overstocking and high prices of albums that stores like Borders and Best Buy touted turned out to be part of their undoing. If Target wants to compete with big online sellers like Amazon for physical products (i.e. clothing, electronics), perhaps it should consider challenging it on digital too.

Is a Target music store, client, and streaming service in our future? Not yet, at least. But you can’t stop the future.

…or Beyoncé, for that matter.