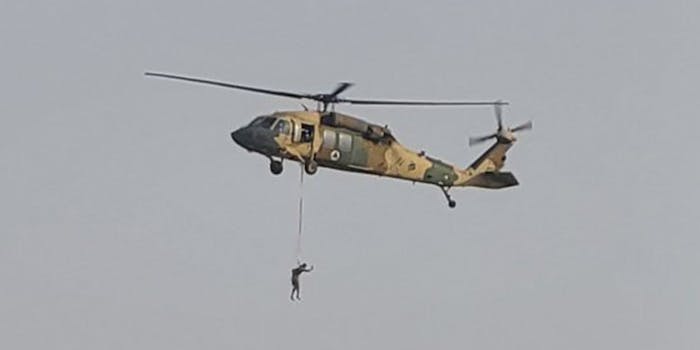 No, the Taliban did not hang a man from a U.S. helicopter in Afghanistan

The footage was mischaracterized and widely shared across social media.

The Taliban did not hang someone from a U.S. helicopter in Afghanistan despite viral claims made online.

Footage shared on Monday by @Holbornlolz, a popular Twitter user known for spreading disinformation, alleged that the Taliban had tied a noose around an individual’s neck before throwing them from a helicopter.

The video quickly racked up more than 2.3 million views and was promoted primarily by right-wing figures, including Sen. Ted Cruz (R-Texas.), commentator Ian Miles Cheong, and Rep. Dan Crenshaw (R-Texas.), many who said the man was an interpreter for the U.S.

While the helicopter does appear to be an American Blackhawk, the claim that the man in the video is an interpreter being hanged appears to have been fabricated.

The video appears to have originated from the Talib Times, a Twitter account that purports to share “official” news from the Islamic Emirate of Afghanistan. But the original tweet makes no mention of a hanging nor reveals the man’s identity.

“Our Air Force! At this time, the Islamic Emirate’s air force helicopters are flying over Kandahar city and patrolling the city,” the account tweeted.

An Afghan journalist claiming to know the pilot, however, said that the helicopter had purposely lowered the man on the rope in an attempt to install a Taliban flag on top of a building.

“Afghan pilot flying this is someone I have known over the years,” Bilal Sarwary wrote. “He was trained in the US and UAE, he confirmed to me that he flew the Blackhawk helicopter. Taliban fighter seen here was trying to install Taliban flag from air but it didn’t work in the end.”

Footage of the helicopter from a separate angle appeared to back up the claim and showed the man waving his arm and holding onto the rope.

“A viral video claiming to show a man being brutally hanged from a helicopter in Kandahar was likely an attempt to fix a flag over a public building, not a hanging,” journalist Shayan Sardarizadeh wrote. “A separate video of the incident shows the man is clearly alive and waving in the air.”

The BBC, citing several Afghanistan experts with Taliban sources, also stated that the helicopter had been attempting to “fix a flag over a public building using their newly-captured U.S.-built equipment.”