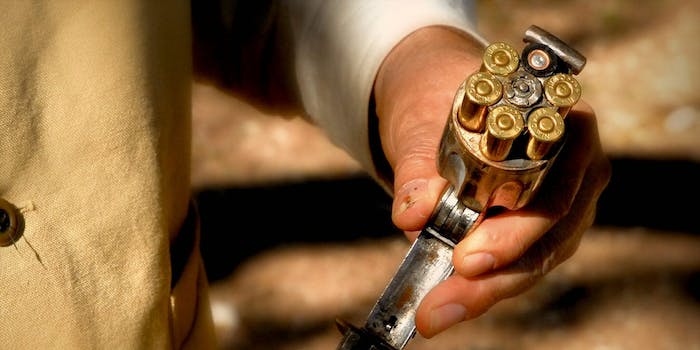 At best, you'll lose your badge. At worst, you'll be imprisoned for a decade.

Thanks to a new law passed in Texas this January, South by Southwest (SXSW) eventgoers are likely to see more openly carried handguns than they’re used to.

This has created quite a stir for one particular reason: President Barack Obama is joining the festivities. On Friday, the president will deliver a keynote speech on the virtues of civic involvement at the Long Center for the Performing Arts in downtown Austin. Only a limited number of SXSW badge-holders, chosen by a ticket drawing, will be permitted inside.

The idea of armed men treading so close to the 44th president is sure to leave more than a few hairs standing on end.

“Our right to keep and bear arms is a right reserved to self-defense and personal survival only.”

That fear is not without rationale, of course. More than a third of all U.S. presidents have confronted an assassin. Four of them—or roughly 9 percent—have died from gunshot wounds, including Abraham Lincoln, James Garfield, William McKinley, and John Kennedy.

But the only thing tragic going on in Austin on Friday is likely to be president’s motorcade, which is expected to wreak havoc in a downtown area congested on the best of days. The president himself will won’t be anywhere near Open Carry Texas, the armed contingent of gun-rights supporters who on Wednesday announced plans to march down Sixth Street while he speaks.

The group’s motto, “open carry isn’t scary,” does not apply to Obama: He’ll be inside a gun-free zone surrounded by a stealthy security detail peppered throughout the crowd.

Moreover, SXSW itself has a strict policy of prohibiting eventgoers from carrying weapons of “any kind, including concealed or displayed firearms” at any official event. Violators may be escorted from the premises and have their credentials revoked. For what it’s worth, the festival’s organizers openly oppose the new Texas gun law, which came into effect on Jan. 1, and authorizes citizens to obtain a license to openly carry a handgun (with some exceptions).

Losing a pricey SXSW badge, however, isn’t the most dire consequence awaiting someone reckless enough to carry a firearm into the president’s keynote speech. A federal law, controversial among some gun-rights advocates, outlines a much harsher penalty, including a fine and up to 10 years in prison.

Obama was widely criticized in 2011 for “criminalizing free speech” when he signed the law, known as the “Federal Restricted Buildings and Grounds Improvement Act,” a decision characterized by activists as an attempt to outlaw protests near political figures. Introduced by Republicans in Congress, the law passed with overwhelming bipartisan support roughly six months after Occupy Wall Street began. In reality, H.R. 347 merely amended a Nixon-era law against trespassing into areas under Secret Service protection.

The agency has apparently already begun an investigation into one member of the 28,000-strong “Open Carry Texas” Facebook group. After founder C.J. Grisham announced the open-carry march on Wednesday, a user allegedly replied, “If you get a clear shot, please fire for effect!” A Secret Service spokesman said that an “appropriate follow up” was being made, according to reports.

Unfortunately for the user, the aforementioned restricted-grounds law applies not only to individuals who carry out acts of physical violence, but anyone who “attempts or conspires to do so.”

Grisham informed the New York Daily News on Thursday that the malicious post had been deleted and its author banned. He reportedly posted a follow-up message to the closed group making clear that any threats or violence would not be tolerated. The gun-rights leader added that the march will not be near the SXSW premises where Obama is set to speak.

“Our right to keep and bear arms is a right reserved to self-defense and personal survival only,” he told the Daily News. “It does not in any way convey a right or privilege to kill or threaten to kill anyone based on political or any other ideology.”

Obama contests that there is little reason for gun-rights activists to feel animosity towards him, at least with regards to Second Amendment rights. As he noted at a CNN town hall in January, gun sales have gone through the roof since he assumed office in 2009.

“They’ve gone up,” he said. “I’ve been very good for gun manufacturers.”

In December 2015, after the president urged Congress to pass stricter laws governing assault weapons in the wake of the San Bernardino shooting, roughly 1.6 million guns were sold—the highest number since he issued a similar call after the 2012 shooting at Sandy Hook Elementary School in Newtown, Connecticut.

Open Carry Texas made headlines in 2013 when roughly 40 of its alleged members, altogether carrying no fewer than two dozen semi-automatic rifles, gathered in the parking lot of a Dallas-area restaurant. Inside were four women, members of Moms Demand Action, a gun-control advocacy group.

Dallas police officers monitored the situation from far, but they refused to intervene as no laws were being broken.