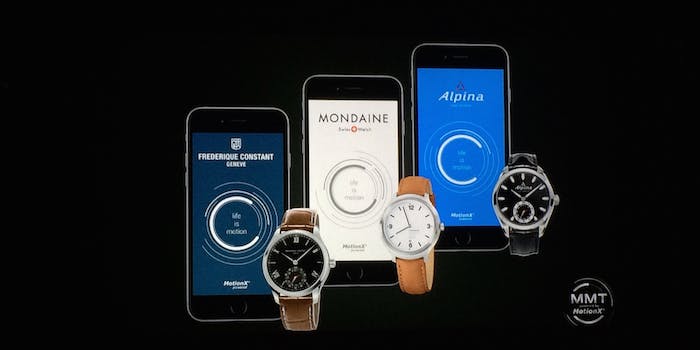 "There are 6 billion people on the planet and they aren’t going to spend money on watches that need to be upgraded all the time.”

Smartwatches aren’t always pretty—that’s one of the major complaints with wearables in general. But on Thursday night, one group of watchmakers debuted some gadgets that turn the entire stereotype of clunky smartwatches on its head.

At the unveiling of the Swiss Horological Smartwatch at the Regency in San Francisco, renowned violinist Elizabeth Pitcairn welcomed guests with whimsical melodies from the Stradivarius violin, and set the tone for the evening. Soon after, luxury Swiss watchmakers, whose businesses have successfully sold watches as elegant accessories for decades, showed off wrist accoutrements for the growing number of consumers interested in a watch that’s both beautiful and functions as more than a timepiece. 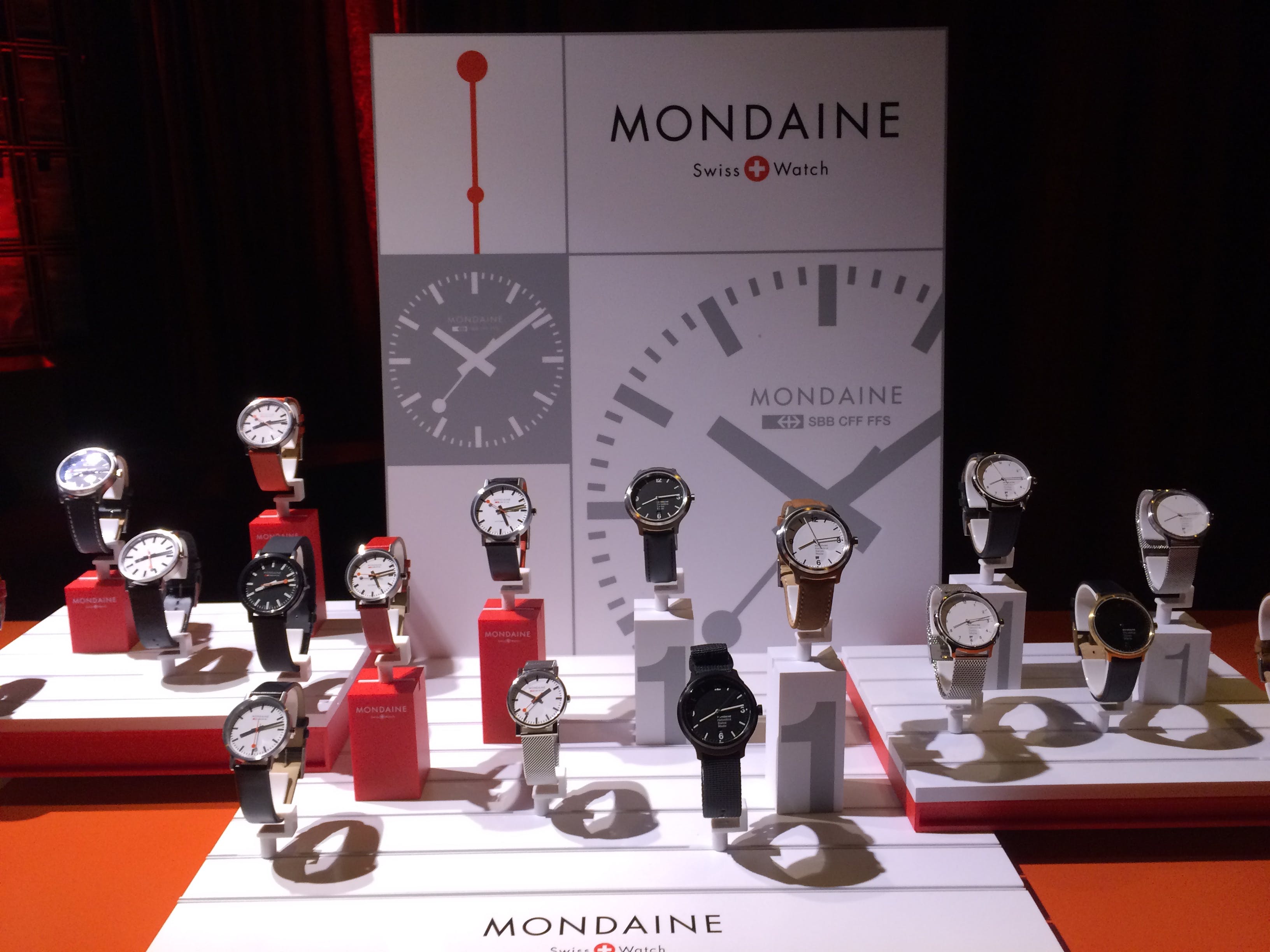 The watches from Frederique Constant, Mondaine, and Alpina are unlike any other smartwatches on the market. In fact, they look identical to the quartz watches the companies have been manufacturing for years.

But with a battery life of over two years and the ability to track movement like the Jawbone or Fitbit fitness trackers, the timeless watches were transformed into connected devices. Comparatively, Withings’ battery life, lasts about eight months. And that’s quite long for smartwatches.

“There’s a group of people who will buy anything,” Phillippe Kahn, CEO of Fullpower, the company that created the technology in the Swiss smartwatches, said at Thursday’s event. “But there are 6 billion people on the planet and they aren’t going to spend money on watches that need to be upgraded all the time.”

Throughout his speech, Kahn took occasional jabs at companies like Apple and Pebble for creating wearables that look like the gadgets we already carry in our pockets. And juxtaposed against the handcrafted Swiss watches, the difference was stark.

Called the Swiss Horological Smartwatch, each timepiece will track data like movement, steps, and calories burned. The watches are connected to mobile devices via Bluetooth, and people can keep track of their daily activity simply by checking an app. If someone purchases multiple devices, Fullpower’s software compiles the data from all the watches and displays it in one dataset—so if you switch watches in the middle of the day, your step count will continue to be recorded.

Fullpower is also the company behind Jawbone and Nike fitness trackers, and thanks to the data collected over the years, the company has one of the largest, most comprehensive sleep studies on the planet, Kahn said. The company has logged over 200 million nights of sleep from over 10 million people.

So in addition to tracking fitness, the Swiss smartwatches will also track sleep patterns, a feature Kahn is particularly proud of.

“We find that some of the metrics that are most important to sleep are called sleep efficiency, or understanding how you fall asleep,” he said. “We try to understand what makes a slight difference to make [the watches] a little better.” 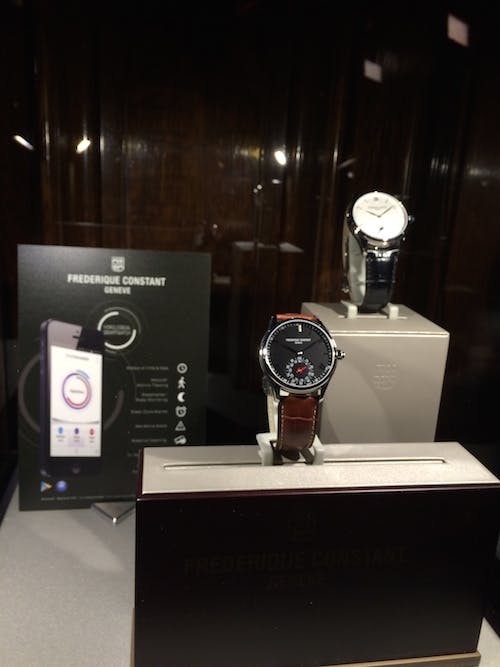 To log sleeping hours, wearers simply have to press the crown of the watch (the dial on the side of the watch face) to activate sleep mode, and the device will track both the length of time and the quality of sleep. Like other trackers, you can set the watch to wake you up between a certain timeframe, and because the device is monitoring sleep efficiency, it can prompt you to wake up only when you’re in a light sleep cycle, meaning you’ll wake up more restful.

They might look like pieces of jewelry, but the watches can be programmed to interact with the wearer. The watch can alert people if they aren’t meeting specified goals, or avoiding afternoon walking breaks.

Though wearable technologies are skyrocketing in popularity, many people, especially women, have lamented the dissonance between the technology and fashion. Watchmakers are creating gadgets that look like miniature mobile devices, and while some companies, Apple in particular, say they’re focusing on the product design, most smartwatches still look overly technical. And on thin wrists, the giant watches can be particularly off-putting.

Swiss watchmakers are putting fashion first, and emphasizing the importance of creating wearables for both men and women. In fashion, one size does not fit all.

Alpina, the company that invented the first sports watch, took the design philosophy that’s driven the business since 1883 and created a stylish smartwatch.

“If people bought Swiss watches only because they tell the time, we would be out of business,” Guido Benedini, CEO of Alpina said at the event. “In the quantified self market, there’s not really a connected product that’s been created with the ladies in mind.”

Mountaineer Melissa Arnot was one of the first people to test Alpina’s new device. The climber took it up Mount Everest, and all the while it tracked her health and sleep data. Arnot’s particular watch was geared toward sports-minded consumers; the device has three years of battery power and is water resistant up to 100 meters. But Alpina has numerous device types, including one covered in diamonds. 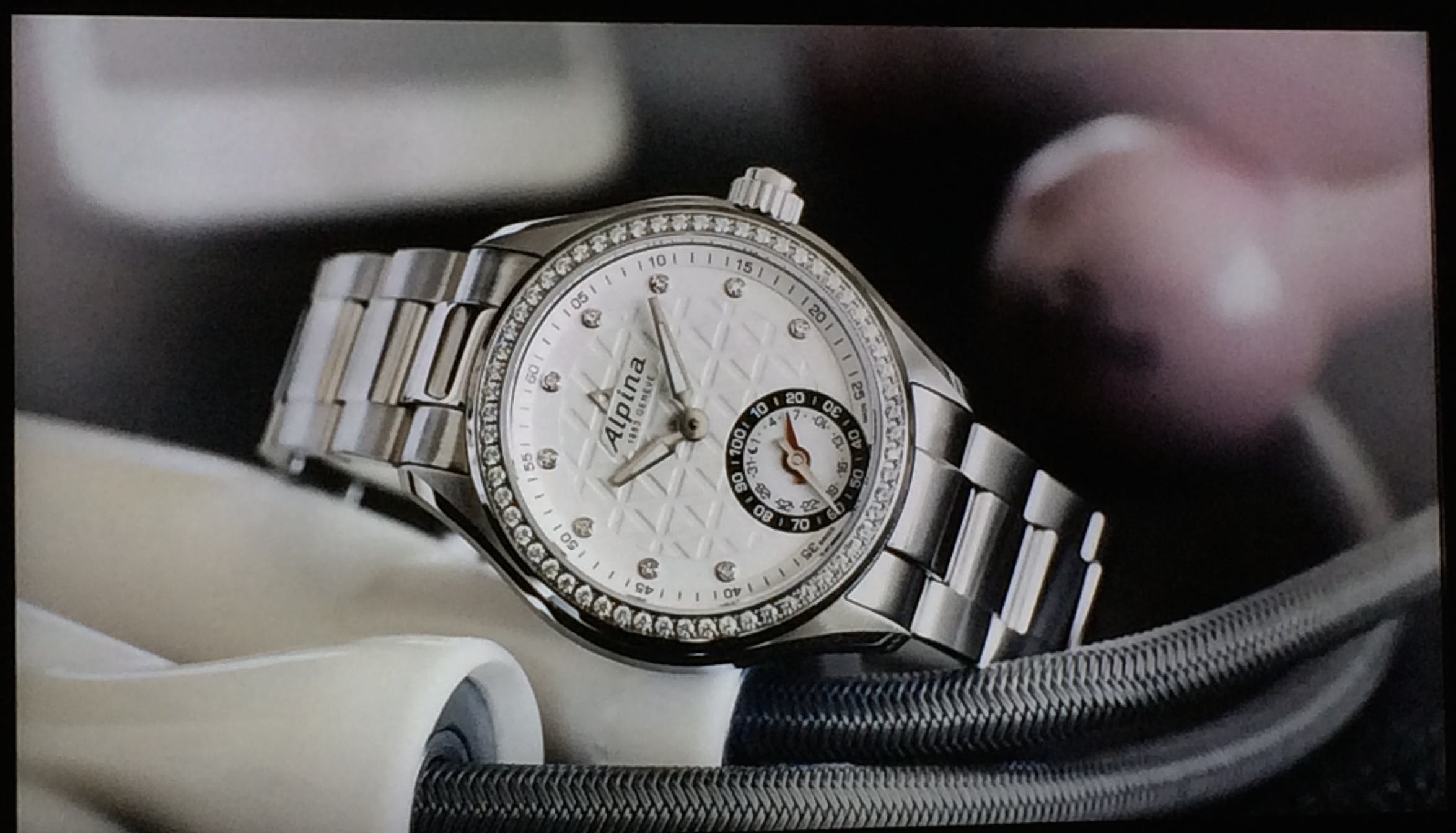 Because the batteries in all the company’s watches lasts so long, maintenance is relatively low. Software updates are pushed to devices through the cloud, and the only maintenance required will be when the battery runs out.

Kahn told me that he’s expecting the battery life to double by the time the batteries in the first batch of watches wear out—meaning that when wearers take their watches in for a tune up, they’ll walk out with a smartwatch battery that will be good for four years.

For Kahn and the watchmakers, creating connected devices isn’t about moving away from tradition. These companies want to ensure that tradition and style are the most important features.

“We can use many different watches, but there are some we want to pass on through generations,” Kahn said. “It fits into the kind of world which is a vision where there’s not much waste. And things that are worth owning are worth fixing.”

The watches are expected to be available in May, and will range anywhere from $500 to $1,000, a similar price point to the companies’ quartz (not smart) watches. Pieces from Mondaine’s Helvetica line could be priced as low as $250. Of course, designer watches like Alpina’s diamond encrusted timepiece will cost much more.