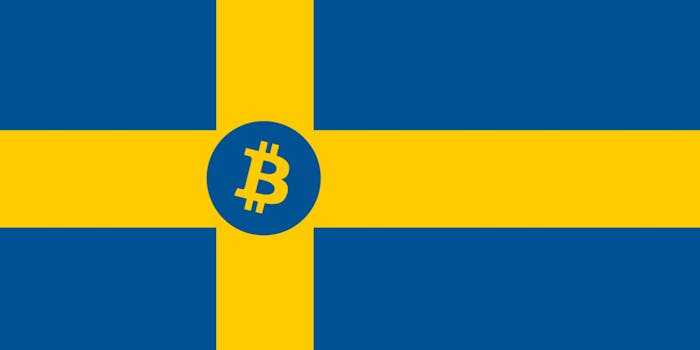 Sweden's Mathias Sundin wants you to understand the true potential of the cryptocurrency.

From its very inception, Bitcoin was designed as a way for people to give other people money as frictionlessly as possible. And if there’s one group that’s almost always willing to accept other people’s money as frictionlessly as possible it’s politicians. While a number of politicians from around the world have embraced Bitcoin, none have done it as wholeheartedly as Mathias Sundin.

Sundin is running as a “liberal centre-right party” Folkpartiet party candidate for a seat in Parliament representing the southern Swedish county of Östergötland. But if you want to toss him a few kronor, you’re out of luck: Sundin is only accepting Bitcoin.

?The world is getting connected in an unprecedented way,” Sundin wrote in an email to the Daily Dot. “Bitcoin is a symbol of this development, and could also play a huge part in changing how the world works. To promote the spreading of Bitcoin and increase the awareness of how the world is getting connected and the new political challenges this brings I have decided to only accept Bitcoin.”

The 36-year-old deputy mayor of Norrkoping, who has previously served in parliament, insists that one of his major goals with the move is to show politicians and regulators, both in Sweden and around the world, that Bitcoin isn’t something to be feared.

?At first, I only saw the negative headlines about Bitcoin and thought it was some sort of unserious speculation bubble,” he explained. ?Then I read up on it and understood that it has the potential to change the world. And when I realized I could order pizza and pay in Bitcoin, then I was all for it!”

Opinions on digital currency by Swedish authorities have been mixed.

Last year, Sweden’s central bank issued a warning about the risks associated with virtual currencies and stated that they are ?not to be regarded as alternatives to national currencies.” Yet, a few months later, the same body issued a report acknowledging the effect of virtual currencies was “essentially positive” for the Swedish economy.

While virtual currencies are relatively easy to transfer from one party to another, they also allow those parties to transact without necessarily revealing their identities. When it comes to politics, this can be tricky—effectively anonymous political donations aren’t exactly the hallmark of a healthy, transparent political system.

Sundin isn’t requiring that his Bitcoin donors reveal their identities, which is legal under Swedish campaign finance law as long as each donor gives less than 4.7 bitcoins, or approximately 20,000 Swedish Krona (~$3,000 U.S.).

Sundin said that, as far as he is aware, he is the first political candidate in Sweden to even accept Bitcoin donations, let alone accept them exclusively. In the United States, a pair of Texas politicians—Rep. Steve Stockman and state Attorney General Greg Abbott—made waves when they started accepting Bitcoin. (No major political candidate, even Sundin himself, has accepted Dogecoin donations.)

Sundin believes that the majority of the Bitcoin donations he has received so far have come from outside the United States.

?I hope that Bitcoin community around the world will take this chance to show how strong it is,” he noted. ?If I get well funded, other candidates in other countries will do the same, which could be very important in the future.”