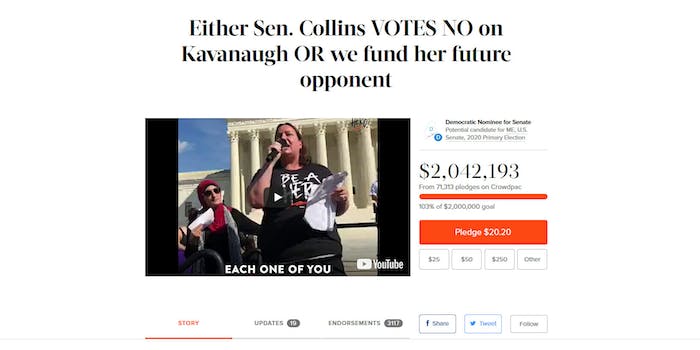 The campaign reached its $2 million goal shortly before her speech.

An online fundraising campaign for a future opponent of Sen. Susan Collins (R-Maine) raised more than its $2 million goal, and ultimately crashed after she announced on Friday that she would vote to confirm Supreme Court nominee Brett Kavanaugh.

The campaign, hosted on Crowdpac, was set up by Maine People’s Alliance, Mainers for Accountable Leadership, and activist Ady Barkan. The campaign promised to donate the money raised to a future opponent of Collins if she voted to confirm Kavanaugh.

“The people of Maine are asking you to be a hero, Senator Collins,” the campaign reads. “If you fail to stand up for the people of Maine and for Americans across the country, every dollar donated to this campaign will go to your eventual Democratic opponent in 2020. We will get you out of office.”

A similar effort was launched on ActBlue, where numerous people had begun contributing to in the wake of the Crowdpac page crashing.

WOW — The Crowdpac page collecting donations for Susan Collins' opponent is down. Was up to $2,040,300 when I donated. pic.twitter.com/LQBoD8qG6E

The @Crowdpac for Susan Collins' opponent has crashed pic.twitter.com/pM9r9u59kb

It appears that so many people are trying to donate to Susan Collins future opponent the #BeAHero CrowdPac site has crashed pic.twitter.com/nMFlRAhYL5

As people noticed that Crowdpac was down, the website addressed the situation.

“Senator Susan Collins has people more motivated than we’ve ever seen before. Hold tight, we’ll be back shortly,” it wrote on Twitter shortly before 3 pm ET.

Senator Susan Collins has people more motivated than we've ever seen before. Hold tight, we'll be back shortly.

Collins had previously called the Crowdpac campaign a “bribe,” according to Vox.

The senator will face reelection in 2020.