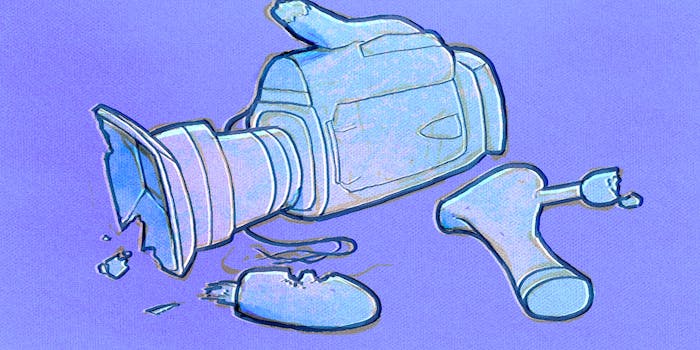 High-tech hoodies are the next wave of wearable tech.

It looks like a normal hoodie, but contains a hidden trigger only you know about.

As you walk down 14th street, out of nowhere, a cop comes and starts giving you grief. Without making any sudden moves you press the button; you have initiated an added layer of protection. Your conversation is being recorded thanks to a hidden Raspberry Pi computer in the garment. Once it’s finished, the hoodie will find any open Wi-Fi network nearby and upload the conversation to Soundcloud.

This is just one of the designs discussed at late August’s Adorn and Subvert: A Discussion on Wearable Resistance, an event capturing an artistic movement that blends fashion with an imperative for privacy.

The designer behind the concept, Iltimas Doha, is a Student Resident at the Brooklyn-based nonprofit hybrid technology-art organization Eyebeam. The hoodie is designed specifically with minority youths in mind; The artist wanted to “create something that gives us more power in these encounters.”

Doha, along with other technology-focused designers, are working to highlight how the wearable technology space is transforming to create new anti-surveillance and oppression tactics.

Adam Harvey is an artist quite active in the anti-surveillance space of wearable tech. In 2013 his work made waves by creating a way to camouflage faces from facial detection algorithms. He studied ways facial detection software analyzed faces and created a system to outsmart it.

Another of Harvey’s anti-surveillance wearable works created a series of body coverings that were undetectable by thermal cameras. The ultimate goal for Harvey’s works is “to avoid being seen.”

Artist and designer Lisa Kori Chung’s work is perhaps a bit wilder than others building anti-surveillance garments. She helped create a series of adornments called “Anti-NIS Accessories.” Chung said these accessories were meant to protect people’s “emotions and thoughts.” She hypothesized a world where Neuro-Imaging Surveillance (NIS) is rampant in public spaces. NIS ostensibly analyzes thought patterns by using a series of biometric software and cameras. For example, an advertiser could surreptitiously record passerby’s reactions to everyday stimuli as a way to study what they are thinking. Chung’s accessories would detect when such a scan is occurring and instantly distract the wearer with something like a shock or a noise. This would create a different response that isn’t indicative of the wearer’s actual reaction, causing a “momentary cognitive diversion.”

For designers like Chung, the work speculative — a thought exercise about where the world of surveillance is going. For Doha, however, the present is more dire. His hoodie is a direct response to programs like Stop and Frisk, which allowed the NYPD to detaim more than 5.1 million New Yorkers for merely looking suspicious.

Naturally, there’s a tension between what is happening now and what could happen. Doha and Harvey’s work both respond to past events and try to create practical options for those being targeted. Others, like Chung, highlight the ridiculousness of the state of surveillance.

One problem these designers face is that this burgeoning wearable space is replete with a sort of defensiveness. Take for a example a bra intended for shock attackers. Or a stiletto that informs the police and family members if a wearer is being attacked. These all share one common attribute: They don’t work toward solving the problem but instead treat the attack as a precondition.

Chung admitted that she was trying to devise ways to combat that sentiment. “Should you have to adjust your behavior in the first place?” she asked. “I’m trying to get away from this defensiveness.”

While it may seem like a lot of these devices target victims, the designers hope to do much more. Harvey hints at a deeper mission: “How do you create more of a full story… more of an argument against what you’re trying to subvert?”

These wearable privacy projects must face this problem while also creating solutions.

At its core, the work highlighted at Adorn and Subvert aims to not only give people a new avenue to fight the powers that be, but also to highlight the omnipresent tension between an aggressive pursuit of public safety and any semblance of privacy.