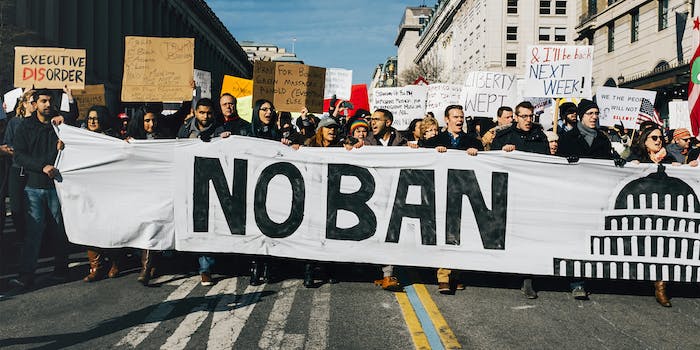 The Supreme Court ruled today, just a mere 18 months after it was first implemented, that President Donald Trump has the authority to institute his travel ban.

In a 5-4 ruling, the Supreme Court deemed that the president had the authority, on national security grounds, to restrict entry into the United States, finding that Trump’s ban said “nothing about religion.”

In Trump v. Hawaii, Justice John Roberts found that Trump had the legal standing to deny “entry of .. covered aliens” that “would be detrimental to the national interest,” a provision under the Immigration and Nationality Act.

Almost immediately after he took office, Trump instituted a ban on travel to the U.S. from seven predominantly Muslim nations.

In December, the Supreme Court originally allowed the third iteration of the travel ban to go into effect while it heard arguments and made its ruling. Previous lower courts have all overturned the three attempts at a travel ban by Trump as unconstitutional.

Roberts was joined in the majority by other conservative justices on the court.

In a dissent, Justice Sonia Sotomayor cited what many thought would be something that would sink the president on the nature of the ban: his tweets.

While litigation over EO–2 was ongoing, President Trump repeatedly made statements alluding to a desire to keep Muslims out of the country… At the heart of plaintiffs’ case is a series of statements by the President and his advisers casting doubt on the official objective of the Proclamation.

And in June 2017, the President stated on Twitter that the Justice Department had submitted a “watered down, politically correct version” of the “original Travel Ban” “to S[upreme] C[ourt].” The President went on to tweet: “People, the lawyers and the courts can call it whatever they want, but I am calling it what we need and what it is, a TRAVEL BAN!” He added: “That’s right, we need a TRAVEL BAN for certain DANGEROUS countries, not some politically correct term that won’t help us protect our people!” Then, on August 17, 2017, President Trump issued yet another tweet about Islam, once more referencing the story about General Pershing’s massacre of Muslims in the Philippines: “Study what General Pershing . . . did to terrorists when caught. There was no more Radical Islamic Terror for 35 years!”

However, that was not considered enough to persuade five justices that the ban constituted an attack on religious freedom.