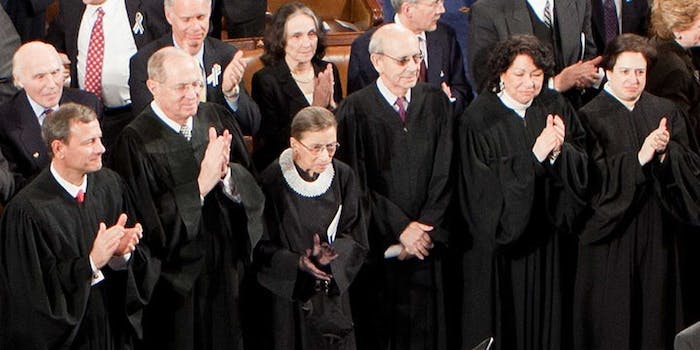 Many Supreme Court justices ‘don’t know how’ to use email

Yes, even Thomas, who hasn’t said a word from the bench in nearly a decade, spouted off on everything from race relations to reading lists. However, what may be the most interesting topic is how the justices themselves deal with technology.

Justices Alito and Sotomayor suggested that the Supreme Court may be too formal, isolated and technologically backward. The justices communicate in writing on paper, not by email. Face-to-face discussions are rare.

“The communications about cases are almost all written except when we’re in conference,” Justice Alito said.

Justice Sotomayor cited two reasons for the court’s reluctance to use technology. One was tradition. “The other,” she said of some of her colleagues, “is they don’t know how.”

The average age for a Supreme Court justice is 68, which doesn’t necessarily preclude them from having a working familiarity with even the most basic consumer technology, but it often does. This reticence to engage with tech should be worrying because, as this consumer technology becomes a more and more central part of Americans’ everyday lives, the justices are faced with constitutional questions about those technologies with increasing regularity.

The justices’ ignorance about how these technologies work occasionally comes out in oral arguments in ways that are undeniably comical.

In 2010, Chief Justice John Roberts asked what the difference was between email and pager. A few years later, he expressed confusion as to why anyone would want to carry more than one cell phone if they weren’t involved in selling drugs. And, another time, he expressed shock that text messages are routed through a service provider and not just beamed directly from one cellphone to another. During a hearing last year, Justice Samuel Alito didn’t know the difference between broadcast TV and HBO—and that’s something the premium cable channel has been attempting to hammer into everyone’s head for decades.

The problem is that, without a working knowledge of the technologies in question, the justices are forced to use analogies to understand precisely what it is they’re tasked with rendering opinions about. As a recent op-ed in Salon argued:

In past arguments, computers were analogized to typewriters, phone books and calculators. Video games were compared to films, comic books and Grimm’s fairy tales. Text messages were analogized to letters to the editor. A risk-hedging method was compared to horse-training and the alphabet. Ebay was likened to a Ferris wheel, and also to the process of introducing a baker to a grocer. The list goes on.

In just the past year alone, the Supreme Court has weighed in on tech topics like whether Aereo has to pay broadcasters for streaming their programming over the Internet (yes) and if police officers need to get a warrant before searching a suspect’s smartphone (also yes).

This isn’t to say that the justices are flying entirely blind on cases involving tech more complicated than a pen and paper. They have clerks who do a lot of research for them and tech-savvy groups like the Electronic Frontier Foundation and the American Enterprise Institute submit “friend of the court” briefs on a regular basis.

But, considering that court is, in many ways, the ultimate authority on U.S. law, knowing that even email is beyond most of their technical abilities isn’t a particularly comforting thought.