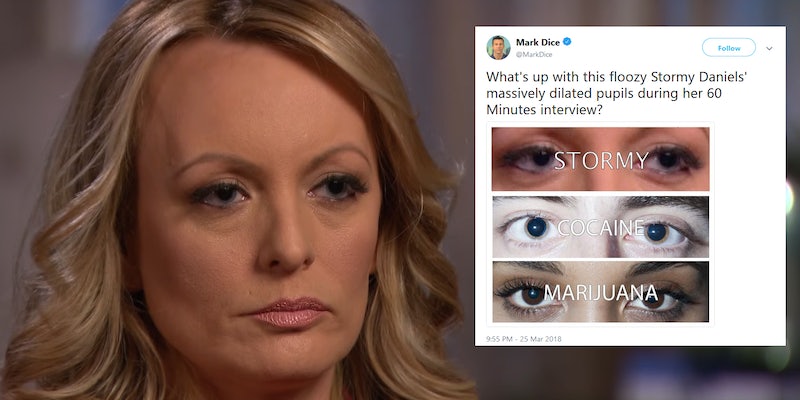 The evidence they point to? Her pupils.

The attacks against Stormy Daniels, the adult film actress who says she had an affair with Donald Trump in 2006, have come out in full force since her interview with 60 Minutes over the weekend.

A group of Trump-supporting women told CNN they didn’t believe her and she was just out to get money, attorneys have traded jabs on cable news, and some right-wing blogs have claimed that there are “Stormy Daniels Truthers.”

But a number of people on the right are now speculating that Daniels was high during her interview with Anderson Cooper on Sunday night.

The so-called evidence they point to? Her pupils.

.@60Minutes Stormy Daniels’ pupils are so large, even with bright lights in her face, you can’t see her iris’s. Can you say “medication?” .@realDonaldTrump pic.twitter.com/05rt9EqpT0

Stormy Daniels's eyes reveal that she was stoned on coke – see pix – everyone else's eyes were fine pic.twitter.com/vz1cxaUnML

In a separate article, the website said Daniels “appeared to be high as a kite” during the interview.

Business Insider spoke with experts on pupil size and said there are reasons other than drugs that people’s pupils dilate–such as simply being on national television.

“It is absolutely wrong to assume that someone is on drugs (legal or illegal) based on dilated pupils,” Megan Papesh, an assistant professor at LSU told the news outlet in an email, adding: “Being interviewed for 60 Minutes is surely exciting or nerve-wracking, and both of those would reasonably cause dilation.”