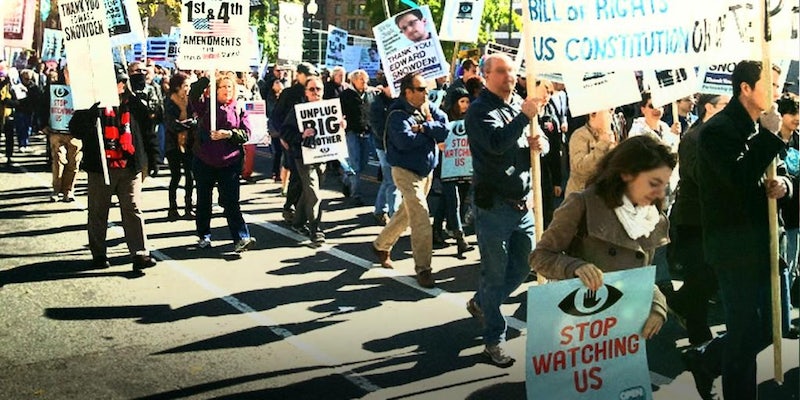 Stop Watching Us rally in D.C. was the biggest anti-NSA event yet

Thousands of privacy advocates showed up in Washington, D.C. Saturday to protest the National Security Agency and its perceived unconstitutional and unchecked surveillance of Americans and the world.

Organized by a who’s who of Internet and privacy activists under a coalition called Stop Watching Us, the rally was ostensibly to protest the 12th anniversary of the Patriot Act. Passed in the immediate aftermath of 9/11, the Patriot Act was interpreted by secret courts to allow the NSA to keep records of essentially every American phone call.

Really, the rally was an excuse for a public still angry with the NSA—and with Congress and President Obama for not yet tempering the agency in the more than four months since its controversial surveillance programs became public—to make some noise. It was the third Stop Watching Us protest, and the first to concentrate its efforts in a single city.

“They’re spying on us. It’s time to stop the spying,” a middle-aged Kentuckian protester named Ralph Smith told the Daily Dot. “I want the Fourth Amendment back. “ 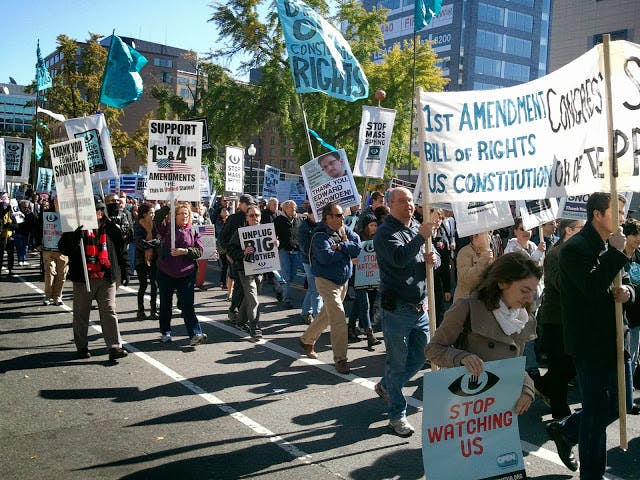 The rally started outside D.C.’s Union Station. There, the crowd listened to Bruce Schneier, one of the world’s foremost experts on cybersecurity, address the NSA’s capabilities.

From there, the crowd marched the half mile to the Capitol Reflecting Pool. In front of the very building where Congress passed the Patriot Act, a host of some of the most prominent privacy experts and NSA critics, including NSA whistleblower Thomas Drake, lawyer Jesselyn Radack, and civil libertarian congressman Justin Amash (R-Mich.), took turns speaking.

“I had no idea what to expect. The country’s so virtual these days that the number of signatures and people who are going to show up could be widely different,” Schneier told the Daily Dot. “I’ve never seen so many people on one of my issues.”

The rally brought out all kinds: young and old, libertarians and progressives. Some dressed in costume—Guy Fawkes masks, clean suits with aviators,paper mache cameras on their heads—but most seemed like everyday Americans. Everyone seemed to echo the same basic sentiments: that the NSA’s vast technical capabilities are terrifying, but its practice of collecting the world’s communications metadata is even more upsetting, and possibly a violation of the Constitution. 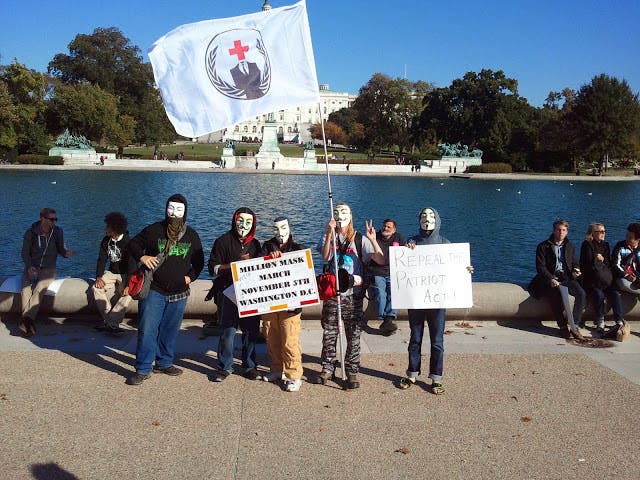 The man responsible for revealing those capabilities, former NSA contractor Edward Snowden, has clearly become a folk hero to the privacy crowd. Scores of protesters held up signs with Snowden’s face, with the message “Thank you, Edward Snowden!” Some held life-size paper cutouts of Snowden’s face over their own, and cheers went up every time any speaker mentioned his name. Snowden’s father, Lon, who has become a celebrity in this world, stood to the side of the stage. He carried a homemade poster of his son’s face, but otherwise kept a low profile.

The event concluded with Rep. Amash symbolically receiving 12 boxes of signed petitions against the NSA—575,000 signatures—from Stop Watching Us, which he plans to deliver to Congress. 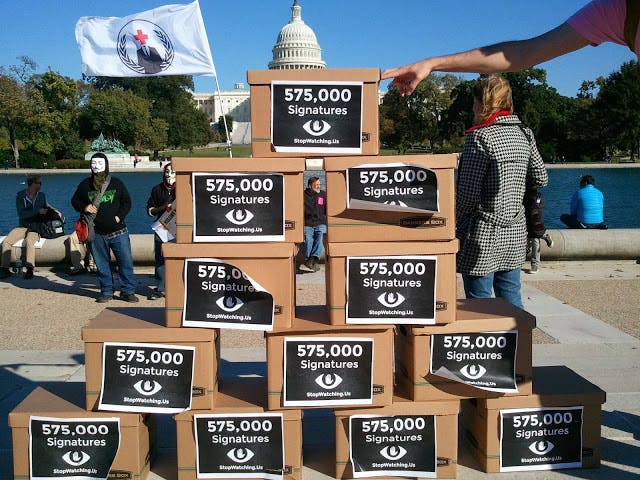 Amash told the Daily Dot that Congress’ current best hope of limiting the NSA’s domestic spying powers is the USA Freedom Act. The bill, written by Patriot Act architect turned NSA reformer Rep. Jim Sensenbrenner (R-Wisc.), could be introduced in the House as early as Tuesday.