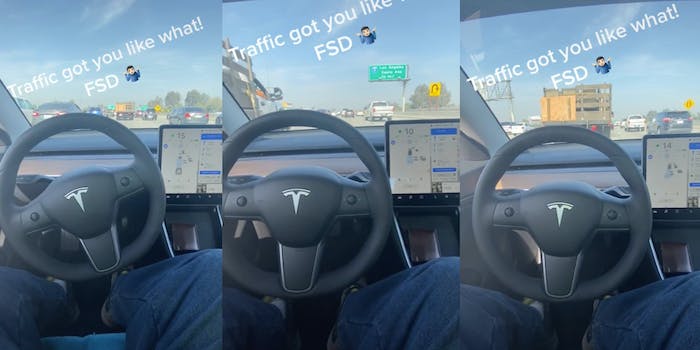 'What would I do without my full self-driving Tesla after a long day at work.'

A Tesla driver praised the automaker’s Autopilot feature in TikTok videos before dying in a car crash.

Steven Hendrickson, 35, reportedly died after crashing into an overturned truck on a California freeway in the early hours of May 5. He was driving a Tesla Model 3, and according to the police’s preliminary investigation, per the Associated Press, he had Autopilot engaged prior to the crash.

“To clarify, there has not been a final determination made as to what driving mode the Tesla was in or if it was a contributing factor to
the crash,” the California Highway Patrol said in a statement, adding that its Multidisciplinary Accident Investigation Team is still investigating.

On Hendrickson’s apparent TikTok account, there are two videos that praise the feature. In both videos, the driver films the wheel as his hands are off it. His foot also appears to be off the pedal in these videos.

“What would I do without my full self driving Tesla after a long day at work,” text across one of the videos reads. “Best car ever!”

“Coming home from LA after work thank god for self drive,” a comment on the other says.

Hendrickson also posted about the Autopilot feature to his Facebook and Instagram accounts. “Don’t worry. I am on autopilot,” he says while filming a Facebook video.

“Best carpool buddy possible even takes the boring traffic for me,” he states on a post saved to his “Tesla stuff” Instagram Stories Highlight.

On its website, Tesla states Autopilot is “intended for use with a fully attentive driver, who has their hands on the wheel and is prepared to take over at any moment.”

“While these features are designed to become more capable over time, the currently enabled features do not make the vehicle autonomous,” the automaker continues.

More than two dozen crashes involving Teslas, including the crash Hendrickson was involved in, have reportedly been under investigation by the National Highway Traffic Safety Administration. Following several fatal Tesla crashes, the National Transportation Safety Board recommended that Tesla limit where drivers can use Autopilot and ensure drivers are paying attention while Autopilot is engaged through a stronger system, according to the Associated Press.

The Daily Dot has reached out to Tesla.

This story has been updated to include a statement by the California Highway Patrol.