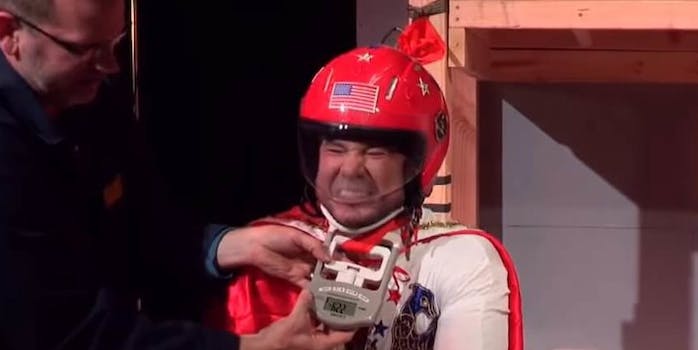 Last night, Steven Crowder live streamed an attempt to recreate Jeffrey Epstein’s suicide. The right-wing comedian, who has spent months promoting the conspiracy theory that Epstein was actually murdered, claimed he was going to prove whether it was possible for the billionaire sex offender to kill himself in the manner alleged.

Crowder spent days hyping the episode, claiming that for his “investigation,” he was “going to try to break my neck” and was “really sticking my neck out.” He also said that his team had built a replica of the cell in which Epstein spent his final moments.

Think Epstein killed himself? We investigate!

In a promo, Crowder melodramatically claimed that he was going to “try and fracture three bones in my neck and hang myself tonight live as you watch.” He also filmed a tongue-in-cheek “training” video in which he pretended to strengthen his neck to prepare.

Reactions ran the gamut from supportive to worried to, well, encouraging, in a manner of speaking. “We’re all rooting for you to succeed,” @AndroidPolitico tweeted.

A few hoping for Crowder to successfully disprove the conspiracy theory were reportedly suspended for violating Twitter’s rules.

A lot of people wishing you luck, but I just wanted to commend you for your bravery in pretending to care about this and riding the meme to clout heaven with a stunt that does nothing but push legitimate questions about Epstein's alleged suicide further into conspiracy territory.

And now for my next act… pic.twitter.com/tV3rYpxRDg

In the end, the episode was nowhere close to the life-or-death situation advertised. Instead, it was basically just a quasi-entertaining publicity stunt. Crowder wore safety gear preventing him from getting harmed, based the threshold for “suicide” on questionable science, and his team did not, in fact, build anything resembling a jail cell at Metropolitan Correctional Center.

For the big moment, an announcer commentated as if it were a sporting event as Crowder pretend-hung himself with a rope that wasn’t tied into a noose while wearing a protective neck brace and insultingly bad Evil Knievel costume. The wooden “cell” was decorated with a unicorn poster and a baby doll, among other ridiculous items.

Crowder’s goal was to create 55 kilograms of pressure on the neck, which he apparently believes is the amount of force required to break the neck bones Epstein did. The amount of force varies greatly and depends on individual characteristics.

According to UCSB Science Line, it can take as little as 25 pounds, or 11 kilograms, to fracture a small bone. Other physicians report that as little as 16 kilograms will snap thyroid and cricoid cartilage in the neck.

Over three attempts, the most pressure Crowder managed on his own was far short of 55 kilograms, but well above 11.

Presumably sensing that the episode was unbearably lame, during his third and final attempt, Crowder intentionally collapsed to the floor and asked a staff member to “wheelbarrow me.” Using this method, they finally succeeded at putting 62.9 kilograms of pressure on the rope.

Some of Crowder’s fans were impressed, but many were underwhelmed, particularly in light of the neck brace. “Nice safety gear, coward,” tweeted one. Another responded, “It didn’t seem like this went how they planned it… :/”

The simulation actually convinced some that Epstein’s suicide was plausible.

Well that's a portion of my life I can't reclaim.

Or the Scranton strangler.

This ended like al Capones vault! Crowder is the geraldo!

Afterwards, asked what he thought went wrong, Crowder said that the better question was what went right.

“I’ve had to question some life decisions that have led me to this point,” he added in what was probably the most truthful moment of the show.

Asked if he believed Epstein could’ve killed himself, Crowder struggled to double down on the conspiracy theory.

“What we really set out to achieve tonight was to hopefully show you a real-world scenario where we’ve been told about the Jeffrey Epstein death doesn’t seem to have been entirely accurate,” he babbled.

“What we set out to prove was that people who were skeptical at all, doesn’t mean that you’re a crazy conspiracy theorist,” he continued, recovering. “I think your criticisms are valid.”

Nevertheless, having (kind of not really) reenacted Epstein’s alleged suicide seems to have convinced Crowder of the possibility that he and the other conspiracy theorists have been wrong all along.

“I do think that in being objective, it is a possibility [Epstein killed himself]—as to whether it’s the most likely scenario, people will have to decide for themselves,” Crowder finished.