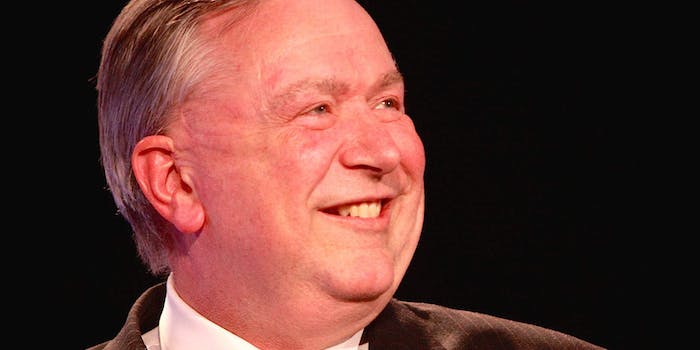 The Texas Republican brushes up on his trolling skills.

Rep. Steve Stockman must have received his PhD from 4chan University, because the outspoken Republican from Texas just proved he’s qualified to teach Trolling 101.

In response to claims from the Internal Revenue Service that it lost years worth of emails requested by Congressional investigators, Stockman introduced new legislation that he’s calling “The Dog Ate My Tax Receipts Act.”

The satirically flippant proposal would allow taxpayers to decline to provide required documents to the IRS, using excuses such as “the dog ate my tax receipts” or “was short on toilet paper while camping.”

“Taxpayers should be allowed to offer the same flimsy, obviously made-up excuses the Obama administration uses,” Stockman said in a statement.

Stockman and other Congressional Republicans are attempting to tie blame to President Barack Obama for an IRS controversy revealed last year, in which the agency more strictly scrutinized applications for tax-exempt status submitted by conservative political groups, specifically groups with “Tea Party” in their names.

Essentially, the Republicans are saying that Obama used the IRS, part of the Executive branch of the government, as a weapon against political opponents. It’s worth noting that to a lesser extent, the IRS also targeted applications submitted by progressive groups such as those with ties to the Occupy Wall Street movement.

As far as the lost emails go, this is a more recent development. Several weeks ago, the Republican-controlled House Committee on Oversight and Government Reform, which is investigating the IRS, requested access to the emails of IRS officials involved in the controversy.

The IRS responded by saying it had lost many of the emails when a computer crashed in 2011, and that data-recovery attempts would be futile because the hard drive from the computer has been “recycled.”

And just for good measure, Stockman also took at shot at the National Security Agency (NSA). Implying that he doesn’t agree with the agency’s comprehensive surveillance tactics, Stockman concluded the statement on his new legislation by saying that if the IRS doesn’t like the above-listed excuses for failing to provide documents, it “can see the NSA for a good, high quality copy.”