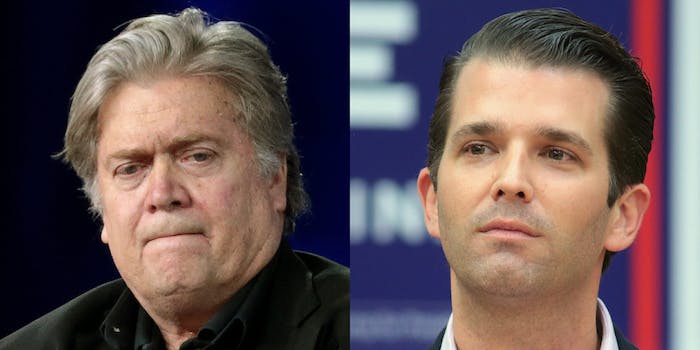 Bannon is going after everyone now.

The news comes from the first look at a new book by Michael Wolff, called Fire and Fury: Inside the Trump White House, which is based on interviews with 200 people in and around President Donald Trump‘s Oval Office orbit.

The Guardian reviewed an advance copy of the book and found that Bannon had an extremely critical assessment of the infamous meeting in Trump Tower in June 2016 with Russian lawyer Natalia Veselnitskaya.

“The three senior guys in the campaign thought it was a good idea to meet with a foreign government inside Trump Tower in the conference room on the 25th floor – with no lawyers. They didn’t have any lawyers.

“Even if you thought that this was not treasonous, or unpatriotic, or bad shit, and I happen to think it’s all of that, you should have called the FBI immediately.”

Bannon goes on to say that he believes Robert Mueller’s investigation into the campaign will “crack Don Junior like an egg on national TV.”

Bannon was not with the campaign at the time of the meeting. Trump’s then-campaign manager, Paul Manafort, did attend but claimed to have left after he found the meeting not worth his time. Manafort was the first person indicted in the Mueller investigation into Trump’s alleged collusion with Russia.