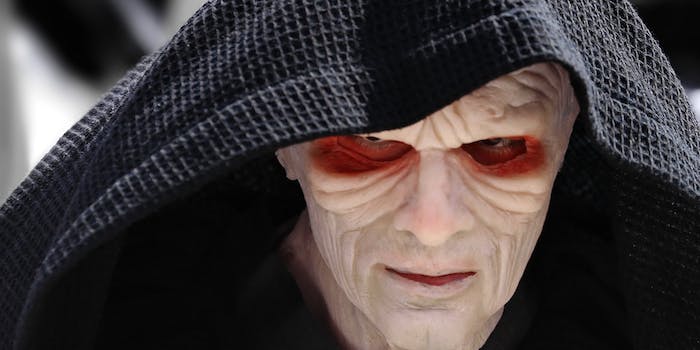 People like Emperor Palpatine more than Barack Obama—here’s why

The Washington Post has taken the results of a fascinating FiveThirtyEight survey about Star Wars and compared major characters’ net favorability ratings to similar scores for prominent American politicians. You might be surprised who the American people like more than some of this country’s leading political figures.

The Post’s graphic, available here, shows that Luke Skywalker has the highest net favorability rating, 91. (Net favorability is determined by the favorable-unfavorable spread, which in Luke’s case is 93-2.) At the bottom of the list is Congress, with a rating of -65. With the exception of Jar Jar Binks, all of the characters from FiveThirtyEight’s survey had positive net ratings.

American politicians don’t fare so well by comparison. All four party leaders in Congress—Harry Reid (D-Nev.) and Mitch McConnell (R-Ky.) in the Senate and John Boehner (R-Ohio) and Nancy Pelosi (D-Calif.) in the House—have ratings around -20.

The Post chart only includes some of the Star Wars characters from the FiveThirtyEight survey, but there’s enough in the Post’s story to draw some broad lessons from the intersection of real-world politics and the Star Wars universe.

Emperor Palpatine’s net favorability rating, while in the low single digits, is nonetheless positive. If you look at the original FiveThirtyEight data, you can see that his score breaks down to 31 percent favorable and 24 percent unfavorable, while 19 percent are unfamiliar with him and 26 percent are neutral.

This gets to the core of why Palpatine fares better than President Barack Obama. Pretty much everyone knows who our president is, and you’d be hard-pressed to find someone who doesn’t have an opinion on him and his policies. The genius of Palpatine, on the other hand, is that he operated in the shadows while enacting his grand plan. Even after his ascension to the post of Emperor and his construction of the Imperial regime, rumors and propaganda obscured much of what he did from his throne on Coruscant. Palpatine’s fearsome reputation stemmed in large part from the aura of mystery that surrounded him. President Obama has no such aura, and as such, public opinion about him is more sharply divided.

If you’re a liberal, there’s a good chance you don’t like Rick Santorum. He’s said some things that make liberals pretty angry, and his low negative favorability rating reflects the fact that these statements have caught up to him. Even so, Jar Jar Binks’ negative score is almost twice that of Santorum. How could a fictional simpleton like Jar Jar earn almost twice the rage and indignation of a man who said that gay marriage hurts the economy? The answer is as simple as Jar Jar himself: one vote.

Recall that, after Senator Padme Amidala was rushed off of Coruscant for her own protection, Jar Jar Binks served as the temporary representative from Naboo in the Galactic Senate. During that time, Supreme Chancellor Palpatine planted the suggestion in his mind that he should call for a vote in the Senate to bestow upon Palpatine emergency war powers. Binks played right into Palpatine’s plans and dutifully stepped forward to propose the measure. With a senator brave enough to sponsor the bill, it passed the Senate, and Palpatine was one massive step closer to transforming the Republic into the Empire.

And that is why people hate Jar Jar more than Rick Santorum. Anger at Santorum breaks down roughly along party lines, but there is widespread, bipartisan disgust with Jar Jar for facilitating Palpatine’s power grab. The lesson for aspiring politicians: Sometimes it’s best to avoid tough votes. Vote “present” if you have to.

Boba Fett is as mysterious as Hillary Clinton is familiar, but both of them have positive favorability ratings in the high teens. What can we learn from the fact that such wildly different people receive the same level of popular acclaim? It all comes down to a reputation as an enforcer. Boba Fett was the most fearsome bounty hunter in the galaxy; if you were on the run from the Hutts or the Empire, sooner or later you’d find yourself staring down the barrel of Fett’s blaster rifle. Those who displeased his bosses wound up regretting whatever their mistake had been. No one could escape him.

In much the same way, President Obama dispatched Secretary of State Hillary Clinton to meet with world leaders on his behalf and to deliver tough messages that were often unwelcome in those foreign capitals. If Clinton runs for president in 2016, she will undoubtedly base her campaign in part on the experience she accumulated as America’s top diplomat. In that hypothetical campaign, Clinton would do well to borrow from Boba Fett’s image when describing her work as Secretary of State. Sure, a crime lord from the intergalactic underground group Black Sun is a lot more terrifying than Russian President Vladimir Putin, but Clinton can only say that she has stared down one of those men, so she might as well push that image in whatever way she can.