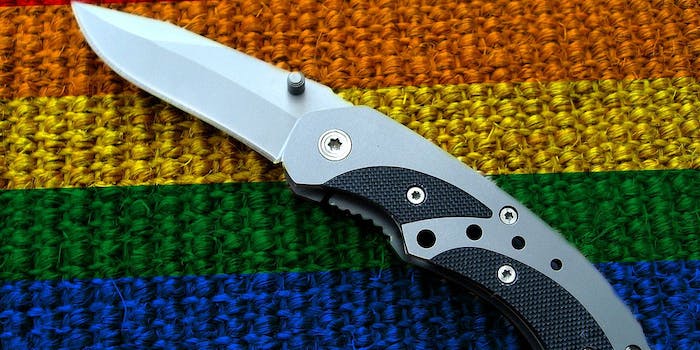 On Thursday in Jerusalem, at least six people were stabbed at the city’s gay pride parade. An ultra-orthodox man attacked the parade participants on Keren Heyesod Street, stabbing them from behind and screaming, until a police officer put him on the ground.

He’s been identified as Yishai Schlissel, who is a Haredi—a sect of conservative Judaism that considers itself the most authentic, and which arose in reaction against modernism.

According to Haaretz, one woman was critically wounded, two men and a woman were lightly wounded, and two men suffered “moderate” wounds.

In 2005 Schlissel stabbed three participants in the 2005 gay pride parade and was sentenced to 12 years in prison for attempted murder and aggravated assault. In 2007 he received a two-year sentence reduction. He was was released from prison less than a month ago.

Upon release, Schlissel immediately returned to his hometown of Modiin Ilit and proceeded to distribute leaflets calling on “all Jews faithful to God” to hazard “beatings and imprisonment” to stop the parade.

The religious right wing in Israel is as virulent toward the country’s gay citizens as America’s religious right wing. Benzi Gopstein of the right-wing group Lehava, who protested the event, called it an “abomination parade.” Baruch Marzel, who protests the parade every year and who is a member of the far-right Ozma Yehudit party, was arrested earlier in the day, though Israeli police said it was unrelated to the stabbing.

According to the Times of Israel, rumors were circulating on WhatsApp that Schlissel was planning this attack. Despite this, Jerusalem police said they had no “concrete” evidence of his plans.

Israeli prime minister Benjamin Netanyahu tweeted, “Stabbing pride parade participants in Jerusalem is most serious event. We found those responsible for the Act. I would like to wish a speedy recovery to the injured.”

The Jewish Chronicle tweeted a photo of the attacker and his knife.

The Daily Rupert tweeted a photo of Schlissel in mid-attack.

Photo via capcase/Flickr (CC BY 2.0) | Remix by Fernando Alfonso III