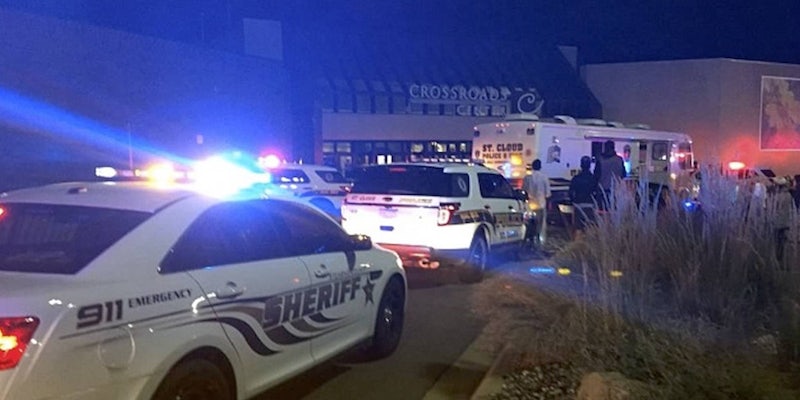 The suspect's identity was released later on Sunday.

One suspect is dead following a stabbing that took place at a St. Cloud, Minnesota mall on Saturday night.

Officers responded to the incident at Crossroads Mall at around 8:15 pm. A timeline of the events that transpired is unclear, though the Star Tribune reports that the stabbings occurred throughout the mall, effectively making the expansive building a crime scene.

A friend's college-aged daughter was at Crossroads Mall is St Cloud & witnessed a stabbing. Suspect dressed as either security guard or cop

At least nine people were injured when the suspect, who was reportedly dressed like a security guard, began his attacks. Of those injured, three are still being treated at a nearby hospital.

An off-duty officer was reportedly responsible for fatally shooting the suspect in Macy’s. St. Cloud Mayor Dave Kleis has identified that officer as Jason Falconer. As of Sunday morning, the mall was on lockdown and will be closed indefinitely.

It’s unclear what the motives of the suspect were, though he reportedly referenced Allah and asked the religion of at least one of those who were stabbed.

According to the above tweet, the suspect was “a soldier of the Islamic state.” Authorities have yet to confirm whether there is a connection between the suspect and ISIS, however. According to SCTimes, the Somali-American community has reportedly identified the suspect as Dahir Adan, a junior at St. Cloud State University who worked as a private security officer part time.

Update 1:13pm CT, Sept. 18: This article has been updated to reflect an updated number of those injured as well as those still hospitalized. Minnesota Gov. Mark Dayton has also issued a statement about the incident:

Statement from Governor Dayton on the attack in St. Cloud https://t.co/StDN4RBMrt pic.twitter.com/S4QkjTi0K4

Update 2:11pm CT, Sept. 18: The suspect and officer has been identified, according to SCTimes.