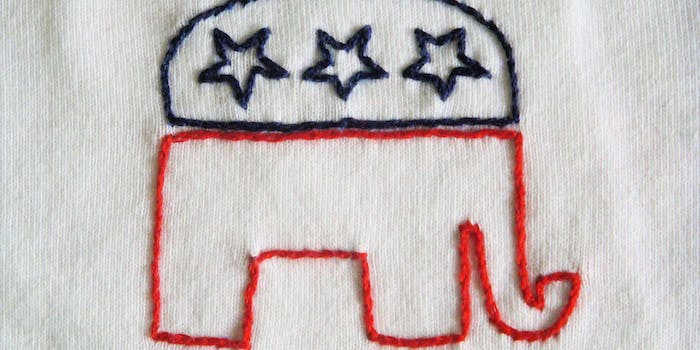 Now is your chance to squat on a .Republican domain name

With many unheard-of web domains becoming available over the next year—the crop of up to 1,000 new extensions including, but not limited to, .hotel, .bible, .sucks and .porn—the Internet is set to change significantly. Or change about as much as did with the advent of .biz URLs in 2001, anyway.

The first people to get upset about the implications of this—outside of Australia and the United Arab Emirates, anyway—are Republicans.

The Republican party, you see, had the foresight to apply for control of one emerging top-level domain in .GOP, but a company named United TLD Holdco is after the rights to .Republican and .Democrat, among others. That two extensions can be in direct competition is not in itself unusual (.finance, .money, and .investment are all on the table), but it’s something Republicans have chosen to actively fight, suggesting they have an exclusive claim on the term. Too bad there aren’t some ancient Romans around to challenge them on that.

According to a report in National Journal, the Republican State Leadership Committee and Republican National Committee “have filed an objection with the Internet Corporation for Assigned Names and Numbers—the California-based nonprofit that is in a lot of ways in charge of the Internet. Their claim is that the term ‘Republican’ is inextricably linked to their party, and that United TLD’s ownership of it might imply a connection to the Republican Party that does not exist.”

In other words, someone might buy a .Republican domain from United TLD and put up a message board for Nutella fetishists, or anything really.

Even if the GOP retains the .Republican set of domains, they will theoretically remain open to anyone wishing to register for one, just as the .GOP names will be. Applicants for the latter have to “identify as a Republican,” though as yet there’s no vetting process in place to dissuade satirists, pornographers and plain old money-grubbing squatters from setting up camp in these vast, unspoiled digital frontiers. “Does talking about the Grand Ol’ Party get you fired up?” asks a name.com registration guide. “Then a .GOP domain might be perfect for you.” We’re willing to guess that plenty of Americans get “fired up” about the GOP in a less-than-supportive fashion, not least when they try to crib an Obama catchphrase.

On that note, if you’ll excuse me, I need to put together a game plan for snapping up every possible variation on MarcoRubio2016.Republican—maybe if I make it really difficult for him to set up his own presidential campaign website, he won’t even bother to run. Democrats, meanwhile, haven’t bothered to secure a top-level domain, presumably because .com is working just fine for them. One party scrambling to get ahead of a technology while the other ignores it completely? That’s what we call politics as usual, baby.