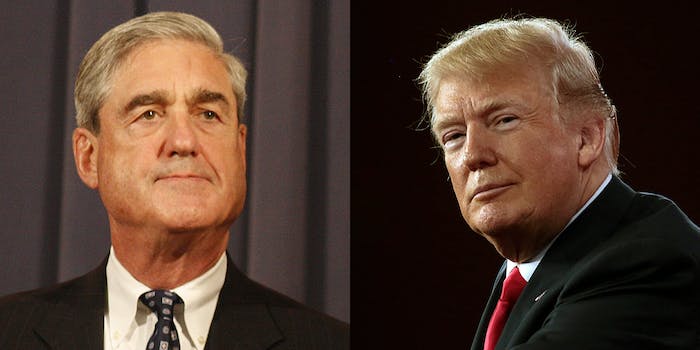 The bill is authored by both Democrats and Republicans.

A bipartisan bill that would protect Special Counsel Robert Mueller is reportedly scheduled to be released on Wednesday as rumors that President Donald Trump may consider firing him continue to swirl.

The bill, which has been drawn up by Sen. Thom Tillis (R-N.C.), Sen. Chis Coons (D-Del.), Sen. Lindsey Graham (R-S.C.), and Sen. Cory Booker (D-N.J.), would create a 10-day delay after any order to fire a special counsel where the decision can be appealed before federal judges, according to the Washington Post.

The scheduled introduction of the special counsel bill comes just days after Trump said “many people” have told him to fire Mueller in the wake of Trump’s personal attorney, Michael Cohen, being raided by the FBI.

“Well, I think it’s a disgrace what’s going on. We’ll see what happens, but I think it’s really a sad situation… Many people have said, ‘you should fire him.’ Again, they found nothing, and in finding nothing, that’s a big statement,” the president said, later adding that Mueller’s team has “the biggest conflicts of interest I have ever seen.”

Trump has considered firing Mueller—who is investigating Russia’s interference in the 2016 election and related matters, such as whether or not the president obstructed justice—in the past, according to reports.

The bipartisan bill came out of older legislation that was drawn up following similar criticism Trump has made about the special counsel, the AP reports. Besides setting up a structure for a legal review process, the bill would also ensure that documents and other material are not destroyed.

Several lawmakers have already come out against the president firing Mueller.

Sen. Mitch McConnell (R-Ky.), who controls whether such a bill would come to the floor, called it unnecessary yesterday.