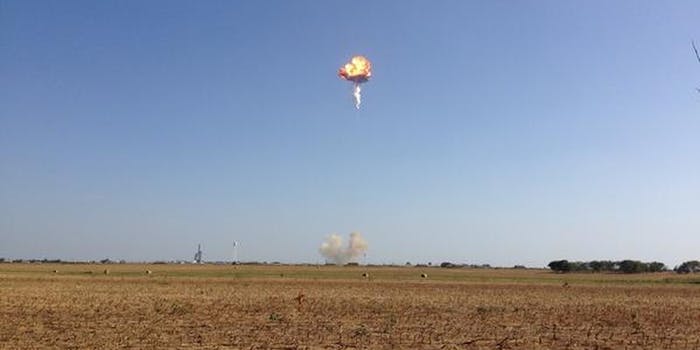 No injuries were reported.

A SpaceX rocket appears to have exploded during a test launch at its facility near McGregor, Texas. Reports popping up from McGregor locals who witnessed the failed launch suggest that the test spacecraft was one of SpaceX’s unmanned Falcon 9 Reusable rockets (F9R), which were due to undergo tests at low altitudes.

@KCENdoug I have a few friends that work there. One had alerted me the test was going to happen. I spoke thru txt after it happened

The footage below, shot by YouTube user and Carrollton, Texas, resident Pat Hykkonen, appears to show the spacecraft exploding mid-air and the grass fire that followed when the flaming debris reached the ground.

Today’s aborted F9R launch isn’t SpaceX’s first time sending an F9R skyward near McGregor, Texas. The private spaceflight company executed a successful test launch earlier this summer, as you can see in the video below.

Unless today’s events interrupt its existing plans, SpaceX will continue to observe the reusable F9R rocket in high-altitude tests at its launch site near Truth or Consequences, N.M.