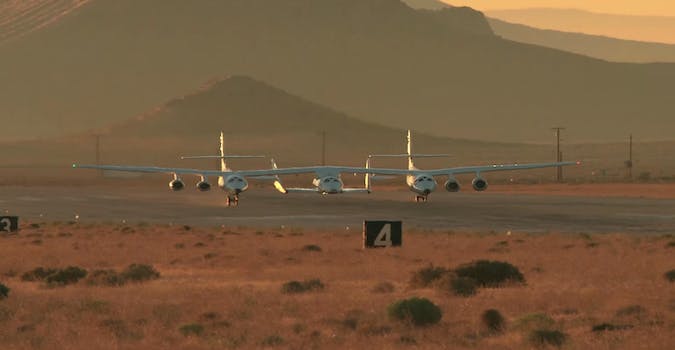 It's the second spaceflight crash this week, though the first with pilots on board.

Today on a routine test flight in California, Virgin Galactic’s SpaceShipTwo spacecraft suffered an “in-flight anomaly” resulting in the loss of the spaceplane. Details are still developing, but some reports indicate that at least two pilots were aboard SpaceShipTwo, though it’s possible that they ejected prior to the spaceplane’s demise. The Associated Press reports that the California Highway Patrol has confirmed one fatality and one “major injury” following the accident. Virgin founder Richard Branson announced that he is traveling to the scene.

Thoughts with all @virgingalactic & Scaled, thanks for all your messages of support. I’m flying to Mojave immediately to be with the team.

SpaceShipTwo is the crown jewel of Virgin Galactic, a commercial spaceflight project helmed by billionaire Richard Branson. The spacecraft launches horizontally from a jet-powered Virgin Galactic aircraft known as WhiteKnightTwo. Whatever led to the space plan’s destruction appears to have arisen after SpaceShipTwo successfully separated from its launch craft at around 50,000 feet.

#SpaceShipTwo has been released by WhiteKnightTwo, and is now flying freely for the 35th time.

The test flight was reportedly carried out by Scaled Composites, one of Virgin Galactic’s contract partners. In 2007, another SpaceShipTwo test incident conducted at the Mojave Airport resulted in three fatalities. Earlier this week, an unmanned Orbital Sciences cargo craft exploded shortly after launch on its mission to resupply the International Space Station.