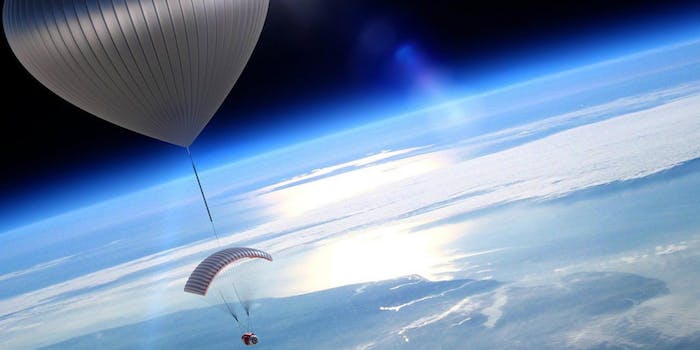 Where are you planning on going for your next vacation? How about the edge of space? Tucson, Ariz.-based company World View Experiences is sending intrepid travelers straight up in a balloon to the edge of the Earth’s atmosphere.

Tourists not satisfied by grounded destinations will be sent soaring 100,000 feet—nearly 20 miles—into the sky. The travelers will be housed in a futuristic-looking capsule which will slowly ascend under a high-tech helium balloon. The journey will take around two hours, where it will sit atop 99 percent of the Earth’s atmosphere.

As the craft ascends, the helium in the balloon expands and decreases in density, keeping the capsule from breaking the plane and floating off into space. Once at its peak altitude, the capsule will sail through the stratosphere for two hours, giving travelers a view of Earth usually reserved for astronauts.

When ready to return to Earth, the pilot vents the helium from the balloon, then a parafoil called the ParaWing takes over to help guide the craft to its landing site, where it lightly touches down back on the planet’s surface.

The entire trip will last nearly six hours, and can take travelers as far as 300 miles from launch and landing site depending on winds.

World View Experience has already run a successful test run, which broke the record for highest successful use of a parafoil. The maiden voyage won’t launch until 2016 but those anxious for a chance to touch the sky can start booking their trip now for the low price of $75,000.