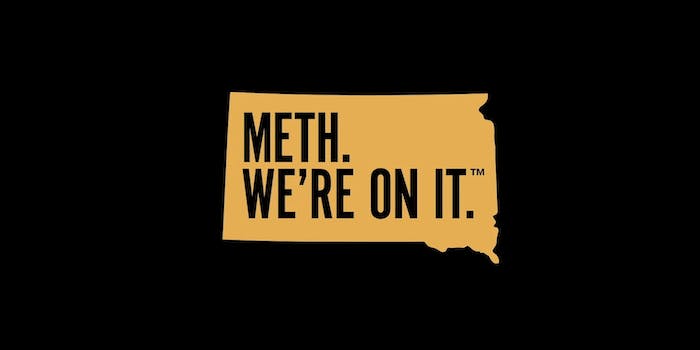 The state's governor is defending the campaign amid social media mockery.

A campaign in South Dakota trying to raise awareness about methamphetamine use in the state is getting blowback from social media for its awkwardly phrased tagline: “Meth. We’re On It.”

On Monday, the state’s awareness campaign was launched and will appear on television commercials, radio ads, social media, and billboards. The logo for the campaign features a yellow outline of the state with “Meth. We’re On I.t” written inside of it.

While the intentions of the campaign are obviously good, the tagline definitely elicited reactions from people.

When you see the South Dakota anti drug campaign slogan is “Meth. We’re on it” pic.twitter.com/phZAITFwHJ

The state of South Dakota spent $500k on an ad campaign to let everyone know we’re on meth pic.twitter.com/TjAycDtjut

“Can anyone in this room think of any possible way this slogan could be ridiculed on social media?”

“Okay. Let’s do it. Congrats everyone.” pic.twitter.com/iCpNMVMkOD

Others pointed out that this isn’t the first time South Dakota has had a brush with an awkwardly phrased campaign. In 2014, the state launched a “Don’t Jerk And Drive” campaign about driving in the winter.

While we focus on South Dakota’s “Meth. We’re on it.” ad campaign, we should not forget the state’s failed “Don’t Jerk and Drive” campaign from 2014.https://t.co/hFciHO5Qc7 pic.twitter.com/KQLpngeTbO

A brief history of ad campaigns by the State of South Dakota;

But Gov. Kristi Noem (R) defended the campaign in a series of tweets on Monday, implying that the social media response was actually helping raise awareness for the campaign.

“Meth is IN SD. Twitter can make a joke of it, but when it comes down to it – Meth is a serious problem in SD. We are here to Get. It. OUT,” Noem wrote on Monday.

Meth is IN SD. Twitter can make a joke of it, but when it comes down to it – Meth is a serious problem in SD. We are here to Get. It. OUT. ❌https://t.co/xtdQB4MVRO

Noem later replied to a tweet that said the social media response was what the ad agency behind it wanted, writing: “Exactly! #winning.”