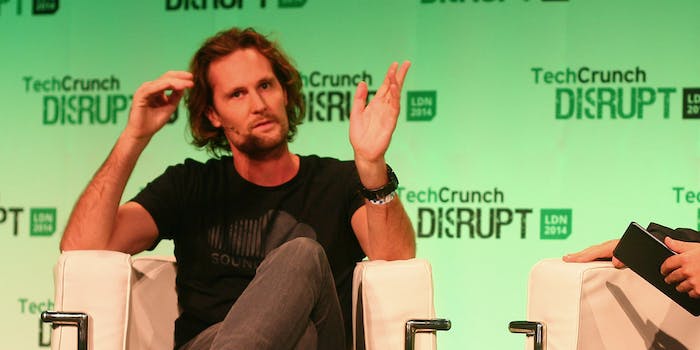 SoundCloud doesn’t know what to do about copyright infringement

The "no comment" line isn't going to cut it forever.

When recently questioned about copyright infringement, the cofounder of SoundCloud, Eric Wahlforss, was left unable to answer. Speaking at the TechCrunch Disrupt conference this week (held for the first time in London), Wahlforss was interviewed by journalist Josh Constine—which amounted to an unenlightening discussion mostly notable for what the CTO didn’t say.

SoundCloud has enjoyed rapid growth, with 175 million monthly unique listeners and more than 12 hours of content uploaded to the site every minute, Wahlfors said—with this success largely built off the site’s favorability with DJ’s and electronic music producers.

But when the topic shifted from the music-hosting platform’s successes to copyright concerns, the German cofounder clammed up, saying that he “can’t comment on specific categories of content.” Asked whether DJ’s who upload content that is unlicensed to the platform should expect it to be removed, he simply repeated he couldn’t comment, adding because it’s “very complicated.”

Wahlforss was even given a specific example: an hour-long DJ set that includes a two minute unlicensed, infringing song sample in it. “If you have the rights, it should be fine” was the evasive response. And if you don’t? “I can’t comment.”

The rest of the interview with Wahlforss offered little insight: He skirted the question when asked about the possibility of an acquisition, and said he was “optimistic”—what cofounder wouldn’t be?—when it comes to monetization.

To be clear, there’s a degree of nuance to the issue of copyright infringement online thanks to what’s being called “remix culture.” Some remixes, for example—of which there are countless thousands on SoundCloud—could count as transformative works, and thus be protected even if the remixer didn’t have rights to the original content (and similar protections exist for satire and commentary).

Conversely, there are also blatant rip-offs or verbatim copies, clear cases of copyright infringement that should not be allowed on any platform. And some argue openly that our copyright regime is out-of-date for our new digital reality, and needs a drastic overhaul.

But Wahlforss didn’t talk about any of this, seemingly refusing to join the conversation surrounding the complexities of Internet creators and content rights entirely. Really, it’s a discussion that SoundCloud should be leading, not ignoring.

And truly, it the platform is home to a vibrant remix culture, one that could help redefine digital copyright laws. If that’s what SoundCloud believes is in the interest of its user base, that’s great—it’s refusing to take a stance that’s the problem.

SoundCloud is no longer a few amateur DJ’s sharing tracks online; it’s on a mission to catalogue “the world’s sounds.” Copyright infringement is a pressing issue, and failing to engage with it doesn’t help rights holders or their user base. It just helps SoundCloud protect itself, and nothing else.