And we thought it couldn't get worse.

Nobody ever argued that Google Glass was stylish, but most early adopters, as well as the general public, understood that they were still in development and certainly not ready for prime time. Still, Google didn’t do its project any favors by parading it around as though it were some world-changing device that you could buy immediately, and now it appears that Sony is following in those misplaced footsteps with its own SmartEyeglass. Yes, that’s the name, and yes, it’s terrible.

At least you’re not a Glasshole

Just like Google Glass, the idea here is to put digital notifications, alerts, directions, and other smartphone-style features right in front of your eyes. Instead of looking at a screen, your text conversation or jogging route just pops up in your field of view. It’s called augmented reality, and companies have been trying to get it right for many, many years. In case you were wondering, these hideous glasses aren’t the answer.

There are a few problems with the SmartEyeglass that you can see right from the start. They’re massive, bulky, and above all, ugly. They look like something a 1970s movie director would have dreamed up to show how weird fashion becomes in the future. However, right now we’re only looking at the “Developer Edition,” which means advocates will say it shouldn’t be judged on its appearance and that the final product will look better. That’s a fine excuse, but until they actually redesign it, this is what it looks like, and it’s not pretty.

The second, and perhaps most damning issue with this wearable, is that unlike Google Glass, the hardware that makes these glasses so smart isn’t contained within the glasses themselves. Instead, there’s a massive chunk of plastic and electronics that hangs from the end of one of the glasses arms via a thick black cord that measures about two feet. This hefty unit houses the batter, speaker, microphone, and other bits that allow the glasses to perform their tricks, and you can’t remove it. Have fun carrying that around. 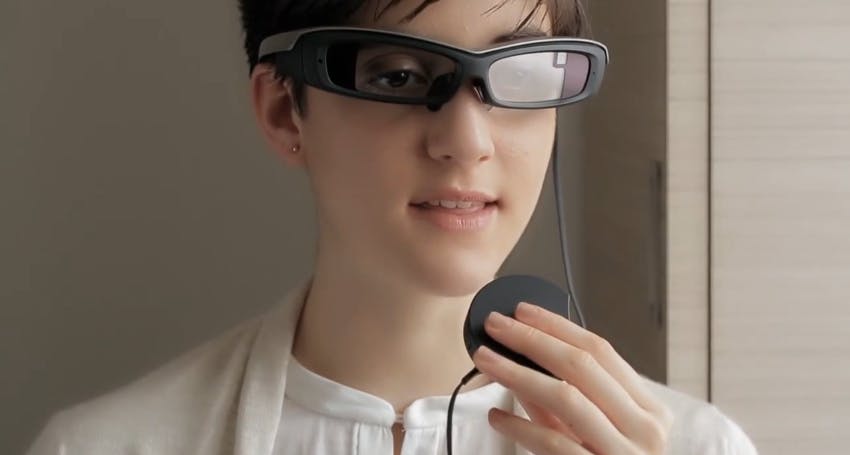 Wait! It gets worse!

So you decided that this ugly, bulky, cumbersome wearable was worth it despite the drawbacks? Well, it gets worse. According to Sony’s official numbers, you’ll get approximately 150 minutes of use out of these glasses before the battery runs out, and that’s if you’re not using the camera. With the lens powered-up, that figure drops all the way down to 80 minutes.

Despite the fact that these were both designed for developers and early adopters only, Sony managed to actually make its digital glasses worse than Google’s. If for some reason you still want to take them for a ride, it’s going to cost you roughly $850. That’s less than what Google charged for its head-mounted augmented reality wearable, but it’s still not exactly cheap, and definitely not recommended for anyone beyond a developer who sees some serious promise in them.