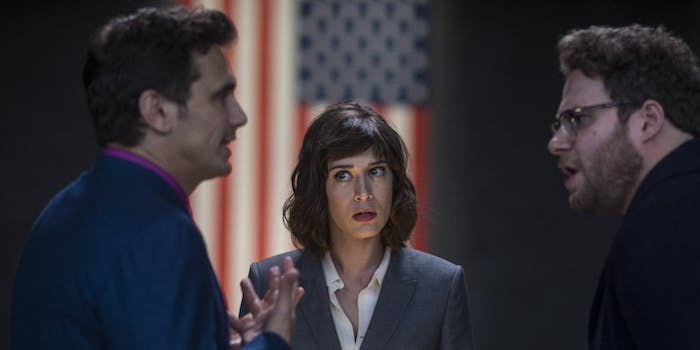 The hacking group behind the ongoing leak of documents from Sony Pictures Entertainment appears to have made a significant new warning, threatening a terrorist attack against screenings of upcoming film The Interview.

The Interview, starring Seth Rogen and James Franco and revolving around a fictional assassination attempt on the North Korean dictator Kim Jong-un, has repeatedly drawn the ire of the hackers, who call themselves the Guardians of Peace, or GOP—leading some to speculate that North Korea or North Korean–affiliated hackers are behind the attack.

The authoritarian and secretive state claims to have no affiliation with the group, though they have praised its work—the dumping of hundreds of gigabytes of highly sensitive internal company data, including executive emails, film screeners, expense reports, and employee information.

“We will clearly show it to you at the very time and places ‘The Interview’ will be shown,” the latest message warns, “including the premiere, how bitter fate those who seek fun in terror should be doomed to.”

“The world will be full of fear,” it goes on. “Remember the 11th of September 2001. We recommend you keep yourself distant from the places at that time.”

“Whatever comes in the coming days is called by the greed of Sony Pictures Entertainment,” the message ends. “All the world will denounce the SONY.”

The message is accompanied by what appears to be an archive of emails of CEO Michael Lynton.