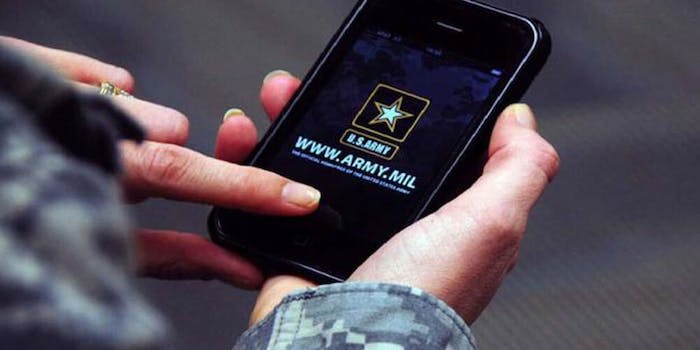 The app not only has the ability to obtain a user's GPS location data but also their photos and contacts.

U.S. military soldiers with top-secret clearances were forced to download an app they say could expose their data to foreign governments, the Washington Post reports.

Soldiers with Fort Hood’s 504th Military Intelligence Brigade were first ordered to download the app onto their personal smartphones in October by their commander, Army Col. Deitra L. Trotter.

The app, developed by Tulsa-based company Straxis LLC, is designed to alert soldiers about everything from weather updates to changes in their training schedule. The soldiers, however, immediately raised concerns over the app’s permissions and the fact that Straxis has a subsidiary in India.

Soldiers who spoke to the Post, many with training in intelligence and counterintelligence, argued that the app opened their personal devices up to exploitation by foreign adversaries.

“Just being in intelligence, we are trained to be extremely paranoid of everything,” a soldier said. “This is serious operational security not being considered.”

The app not only has the ability to obtain a user’s GPS location data but also their photos and contacts.

“We do top-secret work,” one noncommissioned officer said. “If our personal information is being put out there to a foreign power, what can they get from our brigade?”

Although Straxis has stated that user data is not stored on foreign servers and that no third parties have access to the data, the soldiers remain unconvinced of the app’s safety.

After raising concerns with Trotter, the soldiers say their commander not only ignored the issue but had senior leaders check their phones to ensure the app had been installed.

Trotter is alleged to have even claimed to have spoken with Army attorneys to confirm that she could force soldiers to download the app. Soldiers questioned, though, whether the military could actually force them to install an app on their personal devices.

The dispute eventually led soldiers to delete the app in protest and bemoan the orders in posts on Reddit and Facebook. The soldiers were criticized by Trotter during a formation for discussing the issue online.

Since then, the app has disappeared from both the Google Play Store and Apple’s App Store. Representatives for the military unit speaking with the Post alleged that the app was taken down for “preplanned maintenance update.”

“We are confident that the appropriate security protocols are in place to protect our Soldiers’ personally identifiable information,” the unit said.

It appears though that the soldiers may have won the battle. While the app was initially “mandatory,” the unit now says it will only “highly encourage” soldiers to use it.