This dress uses solar energy to charge your cellphone

Most wearable tech values function over fashion. Designer Pauline van Dongen is shooting for both.

You know when you’re at a bar and your phone is sitting in the battery danger zone, and you spend 10 minutes trying to elbow your way to the bartender to ask if he has a charger, and when he finally tells you he doesn’t your phone makes that pathetic whirring noise and quietly powers down?

Designer Pauline van Dongen wants to make sure you never experience that feeling of helpless desperation again. She’s designed a dress and coat that harness the power of the sun’s energy to charge your cellphone. All you have to do is pop your phone into a mini-USB cord attached to the inside of the dress, and its battery will recharge 50 percent within an hour of use. A Netherlands-based fashion designer, van Dongen has always been interested in merging fashion with technology. She was inspired to launch the Wearable Solar project last year, collaborating with Christiaan Holland from the HAN University of Applied Sciences and solar energy expert Gert Jan Jongerden on the project.

“Everyone’s addicted to their smartphones, and we want them constantly powered,” van Dongen told me about the inspiration behind the project when I visited her in New York. She is currently there presenting the project at Brooklyn’s Northside Festival. “We’re always on the run, and the better our batteries get, the more we use them. So why not power your phone through your clothes?”

The wool and leather dress features 72 thin, flexible solar cells, which are sewn to panels on the inside of the garment; it can either be worn open, with the solar cell panels revealed, or closed. To charge your cellphone, the wearer plugs in their phone to a mini-USB cord attached to the dress, places their phone in a pocket on the inside of the dress, and opens up the coat to expose the solar cells to natural sunlight. The cells then convert the solar energy into electrical energy, which can charge a cellphone up to 100 percent within two hours. (Artifical sunlight also works, but it takes much longer to fully charge a cellphone battery.) 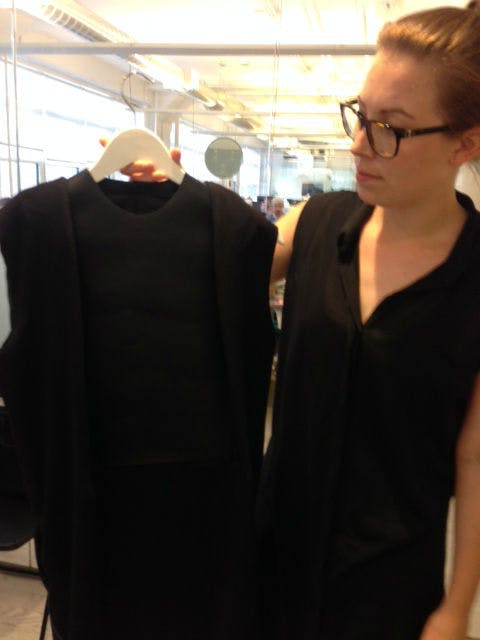 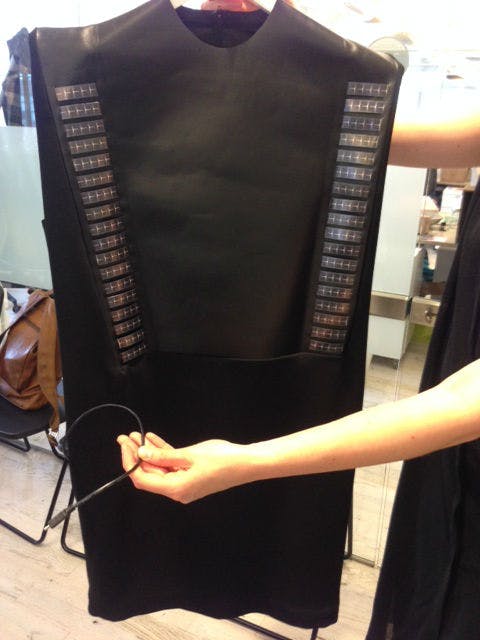 The concept of a garment that harnesses solar energy to power a cellphone is nothing new: The startup EnergyBionic tried to raise funds for a solar-powered wristband that plugs into your smart phone, and earlier this week a Filipino teenager made headlines for designing a solar-powered cellphone charging pad that can be worn inside your shoe.

With Van Dongen’s Wearable Solar Project, the innovation lies not in the basic idea of a solar-powered wearable but in its design. As an academy-trained fashion designer (she received her masters from the Academy of Arts in Arnhem, Netherlands, launching her own company in 2010), van Dongen is interested in combining the comfort, aesthetics, and wearability of high fashion with the utility of wearable tech. Unlike most bulky wearables, which often disregard aesthetic concerns and are designed solely to impress your friends, van Dongen hopes to create a garment that is just as sexy as it is functional.

“Fashion is a language. It’s a way to communicate identity,” she says. “What you see a lot in the wearable space is technology being harshly applied to fashion, whereas I believe technology comes from within. We’re still dealing with these bulky, rigid electronics that don’t allow for any comfort and wearability and they’re not good for nature. So the question becomes, how are we going to create a garment that goes beyond just being functional, and how are we gonna do this in a sustainable way?”

There are still improvements to be made to the Wearable Solar project. For instance, the solar cells used in the dress are not washable, so van Dongen is collaborating with tech companies to research washable solar cells. The ultimate goal is to create a solar-harnessing textile that can be used in any garment, rather than having the solar cells themselves sewn onto the fabric.

But van Dongen is optimistic that wearable solar tech will become fully integrated into the commercial marketplace in a few years. The issue, she says, is convincing the old guard fashion industry to follow suit. While there are some signs of progress in this regard—Diane von Furstenberg, for instance, just collaborated with Google Glass to create a line of high-end smart eyewear—the primary obstacle is convincing tech-shy, high-end brands to embrace wearable tech—and for consumers, who have largely been raised on a steady diet of fast fashion, to value their clothes as much as they value their technology. Because pretty soon there won’t be a clear distinction between the two.

“We deal with electronics very differently compared to fashion, so when you combine the two, something has to change in terms of the perceptions of the consumer. These garments with expensive electronics, you can’t just discard them the way you would with a t-shirt you buy from H&M or Zara,” says van Dongen. “At the same time, there’s huge potential for wearable tech, because if that [consumer mindset] changes, then technology will give new value to fashion.”