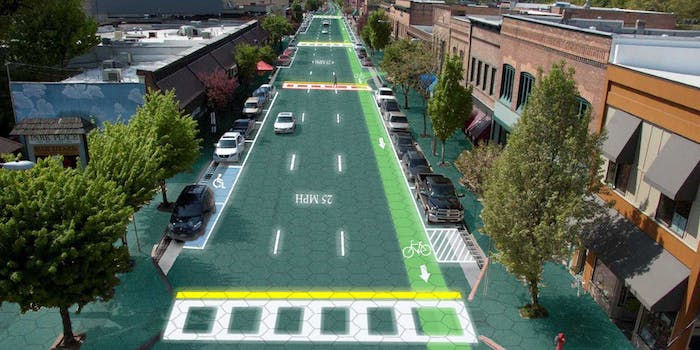 The futuristic road tiles have raised over their crowdfunding target.

Scott and Julie Brusaw want to drastically cut America’s bills by providing clean energy for all. And cut down on pollution and smog. And improve visibility for pilots landing aircraft. And keep roads free from frost and snow. And spice up playgrounds. And revolutionise road signalling, making safer to drive at night. And warn drivers about road hazards. And do away with the need for telephone poles and hanging wires. And decrease soil and water pollution. And create thousands of new jobs. And—do all of this with one piece of technology.

And it’ll pay for itself.

Sounds like a pipe dream, right? Well, thanks to a wildly successful IndieGoGo crowdfunding campaign, the engineering couple’s dream is today a little closer to reality.

If you haven’t already seen the viral video promoting their campaign (above), allow me to explain. Solar Roadways (or “SOLAR FREAKIN’ ROADWAYS,” as they’re increasingly billed) is a technology currently in development by the Brusaws that aims to replace all roads, pavements, landing strips and tarmac areas with hexagonal glass “tiles.”

The surface of the tile is a proprietary glass that is apparently capable of meeting all weight, traction and durability requirements for roadways (as seen in this video of a tractor driving on a prototype), and inside—well, that’s where it gets really interesting. 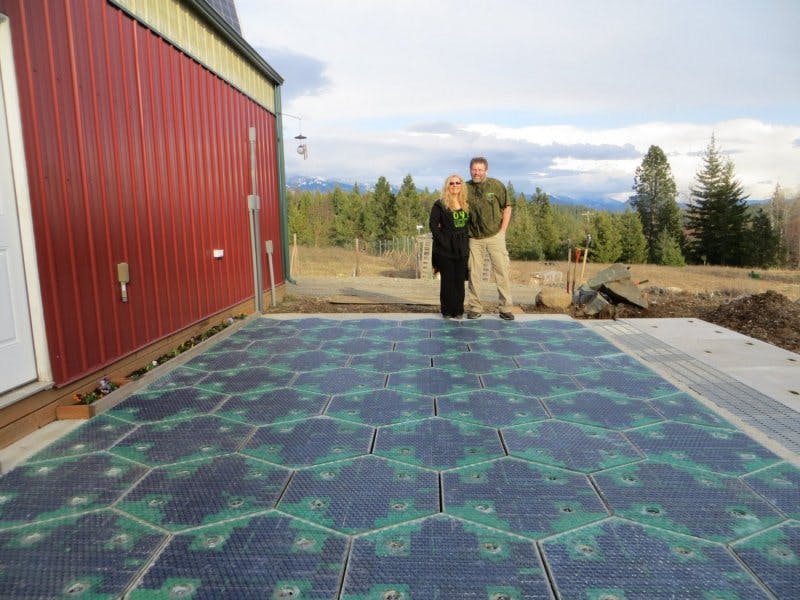 Scott and Julie Brusaw standing by one of their prototypes.

Inside the tile will be hundreds of “smart” LED lights in multiple colours rigged up to a circuit board, allowing the road to change its markings in real time to denote hazards ahead. There’ll also be heating elements, keeping the surfaces just above freezing to eliminate the dangerous conditions caused by icy roads. And powering all this will be an array of solar cells embedded in the tile.

These cells aren’t just powering the lights and heating however—the applications go far beyond that, the Brusaws claim. They will be able to act as a grid to support the mainstream roll-out of electric cars, and if there was widespread implementation of their technology, they would provide enough clean energy to power the entire United States. Every road would become a power source, alleviating the need for fossil fuels.

The infrastructure required for implementation required would also create thousands of new jobs, and two tunnels underneath the road surface would alternately house electrical and telephone cables, and sluice away storm water.

It’s an ambitious plan, but thanks to some savvy videos they’ve managed to get a lot of people on board. Their crowdfunding campaign on IndieGoGo—a website that allows members to submit plans for products that the general public can then choose to fund—has now successfully met its goal of raising one million dollars—and then some.

With a week to go, as of press time the campaign had raised $1,172,083 dollars and counting. In the time it took to write this article, the campaign pulled in another $10,000.

The project has previously received funding from the Federal Highway Administration, but it’s not without its fair share of detractors. Joel Anderson on equities.com damns the project as “really silly,”  pointing out that the panels wouldn’t actually be very efficient, due to the fact they lay flat rather than facing the sun, and many highways are at least partially shaded. Furthermore, Anderson points out, the infrastructure costs would run into the trillions of dollars. It’s all very well to claim the technology will pay for itself, but the money has got to come from somewhere in the first place.

Crucially, he points out, it’s “really hard to see how another $1 million given to these two actually gets anyone any closer to this being a reality. There’s no discussion of cost; there’s no battle plan for convincing local, state, and federal governments to invest in this sort of infrastructure; they seem intentionally vague about the people who are supposedly lining up to buy this; and it’s not 100 percent clear what this money would actually be spent on.”

Crowdfunding offers people a chance to bypass traditional gatekeepers and take their ideas directly to their audience, no matter how wild or unconventional. Whilst it has produced revolutionary, extraordinarily successful new products—like the Oculus Rift virtual reality headset—it has also seen its fair share of products that underperform, fail to deliver or are even outright fraudulent—like the bogus Healbe GoBe fitness tracker.

It remains to be seen which category Solar Roadways will fall into.