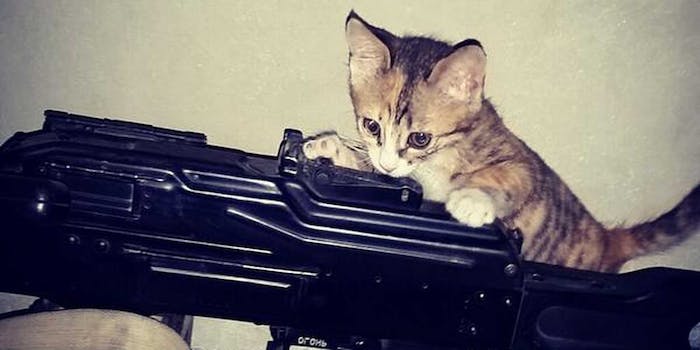 Here are ten essential social media accounts that will help you find some real understanding of what’s happening today.

Syria and Iraq are home to the first social media wars. Jihadists are live tweeting their fights, Instagraming their food, and blogging about the reasons they’re willing to both kill whoever they believe is the enemy and die for their cause.

Following the war can be challenging because accounts get suspended and people disappear, but the Daily Dot has put together a list of 10 essential social media accounts to follow in order gain some real understanding of what’s happening today.

1) J.M. Berger has been researching extremism on social networks for years, providing unique and cutting insights into the way militants inside the United States and around the world use the Internet to their advantage.

For the Atlantic, I explain how ISIS games Twitter with a dedicated phone and Web app http://t.co/EktSAJVqcc pic.twitter.com/I43EpTPkVD

At this point, I am inclined to think ISIS supporters’ tweeting of fake pictures of its battles in Iraq is an organized effort.

2)  Chcechclearisback is a jihadist in Syria who posts beautiful photos of the country’s horrible civil war to Instagram. In addition to pictures of kids and plenty of selfies, he’s a man who can’t resist of good picture of cats and deadly weapons—particularly with the hashtag #CatsOfJihad. He also holds frequent question and answer sessions on Ask.fm. This morning, he told his followers that the war was getting worse.

3) Abu Jibril Muhajir is an ISIS fighter in Iraq who posts gruesome pictures of his bloodied and fallen comrades as well as of the ISIS performing civic duties like installing trash cans.

4)  Charles Lister is a researcher and fellow at the Brookings Institute in Doha, Qatar who closely follows and analyzes militants’ on social media.

A 1st for #Iraq, but it may well become far more common: Jaish al-Mujahideen fighters use a T-55 tank in #Kirkuk: http://t.co/uhsp87O9Pi

5)  Life of a Mujahid is another Syrian jihadist who posts political perspectives. Lately, he’s been talking about his admiration for the Islamic State in Iraq and Syri (ISIS) in Iraq, giving key insight into the way many Syrian fighters perceive the army now fighting in northern Iraq.

Well, you have to admit, Mujahideen do look cool! pic.twitter.com/2zofjmWBcc

Alhamdulillah, yesterday we went and distributed cloths, blankets etc to children living in these tents. pic.twitter.com/SQCRIUi1v2

Well we dont know if America will reach Iraq & syria first or ISIS and co. will bring Sharia to America first

6)  Abu Fulan al-Muhajir is another Syrian jihadist cat lover, but who among us is not?

Ever wondered how we charge our phones here? pic.twitter.com/oHqs6TDCwv

7)  Abu Muhajir spends his time documenting the jihad while answering questions from around the world on Ask.fm, including advising western Muslims on how to join his fight in the middle east. On his Tumblr, where he curses western media and talks about his own escape from the west, Abu documents the travels, battles, and ultimate death of a Canadian muslim he fought alongside.

The Mujahideen Praying together inside a cave..originally built by the Romans! “The tourism of this Ummah is Jihad” pic.twitter.com/5Gg8SSlmjv

8)  Blogs of War is one of the best feeds on Twitter monitoring armed conflict and technology around the world. Although it’s not limited to Syria and Iraq, the feed is a great source for articles and reporting whenever violence flares up in the region.

9)  C. Anzalone is a PhD student at the Institute of Islamic Studies at McGill University. The Twitter feed is a good source of information about technology and ideology all over the Muslim world.

Events in Iraq have become a tool in the media war between Kenya and Al-Shabab. re: PT

Why ISIS’ Social Media Campaign is ‘Even More Brutal’ Than Most (Julianne Pepitone): http://t.co/9Uqe6U43md // Interviewed for this article

10)  Webradius has played an interesting role in the online conversation surrounding the wars in Iraq and Syria including debunking fake photos claimed to be showing recent ISIS battles in Iraq. In fact, a quick Google image search revealed otherwise.

Suffice to say Google’s reverse image search is not a friend of the IRGC’s media boys. Next image is from February of this year.