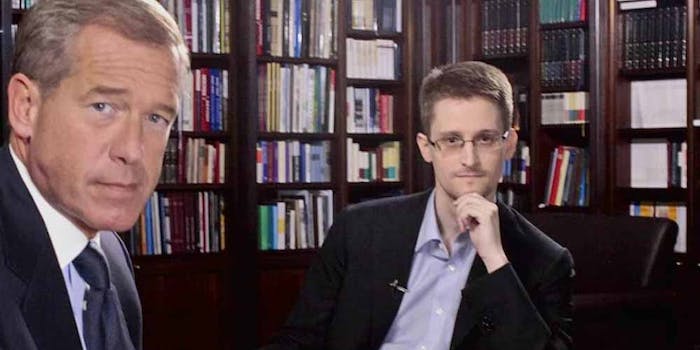 "'Don’t you know what happens to people like that?’”

During the decade that Edward Snowden worked in U.S. intelligence, the National Security Agency leaker says he raised concerns to his superiors and to the NSA’s general counsel multiple times about the agency’s vast spying apparatus. He was not just ignored, he told NBC’s Brian Williams on Wednesday night, but warned to stay quiet.

“Individuals who had never seen these tools were shocked,” he said in an interview with NBC Nightly News, his first appearance on a U.S. network. “People who had seen it were worried about it, they said you’re right that we shouldn’t be doing this. But they also said, ‘If you say something about this, they will destroy you. Don’t you know what happens to people like that?’”

Snowden claimed that he repeatedly went through official channels to raise concerns about NSA spying, including talking to superiors and colleagues when he was stationed at Fort Meade and in Hawaii as well as in letters to the NSA’s general counsel and the NSA’s director of compliance.

Host Brian Williams reported that NBC News had spoken to several sources who confirmed that records exist of at least one email that Snowden sent to the agency’s general counsel prior to the leaking.

In response to accusations that his leaks have resulted in “significant and irreversible damage” to U.S. security, as Gen. Keith Alexander has charged, Snowden expressed skepticism.

“There is concrete proof that terrorists groups are making changes, that will make our jobs tougher,” Alexander said. This amounts to “giving the enemy our playbook.”

“Can you show that I’ve badly damaged the country?” Snowden responded. “If, after a year, they can’t show a single individual who has been harmed in any way, is it really so grave, is it really so serious?”

Using the same argument that Glenn Greenwald has been making in the media for the past year, Snowden said that baseless accusations of harm are launched against leakers all the time but until the government produces proof of deaths relating to the leaks, there is little reason to believe them.

Snowden, who says his grandfather was in the Pentagon on September 11, 2001, and that he was at NSA headquarters at Fort Meade during the attacks, said that the government used that day’s national trauma in a “disingenuous” way that ultimately led the U.S. government to a war “launched on false premises” in Iraq.

“The American people were misled,” he told Williams. “Whether that was bad faith or bad intelligence I can’t say for sure. But I can say it shows the problem of putting too much faith in the intelligence system without debating them in public.”

As an example, Snowden explained at length how easily the world’s most powerful intelligence agencies are able to spy on even some of the most common devices we own, like smartphones.

“The NSA, the Russians, the Chinese, any intelligence service … can own that phone as soon as it turns on,” he said. “They can turn it into a microphone, they can take pictures, they can take the data off of it. It’s important to know that this is done on a targeted basis.”

“There have been times in American history where what is right is not the same as what is legal.” #Snowden talks about civil disobedience.

One of the most shocking moments in Snowden’s time at the NSA came when he saw a program that could get inside a person’s thought process.

“People at the NSA, analysts, can watch Internet communications, watch correspondence, watch their thoughts form as they type,” the 30-year-old explained. “Any service can see you write sentences, backspace, pause, and think about what you wanted to say. It’s this extraordinary intrusion into your drafting process, into the way you think.”

From a simple search, spies can find out an enormous amount of information, Snowden said.

“You might say, ‘does anyone really care that I’m looking up scores for the Rangers’ game?’” Snowden said. “Governments, hackers, any nefarious individual will say yes because it says a lot about you.”

A spy, he said, can quickly find out that you speak English, that you’re American, that you’re interested in this sport, they’ll know your habits, location, and something called “your pattern of life,” in which everything from the company you keep and the activities you take part in become obvious to whoever is surveilling you.

“The problem,” said Snowden, “is that this is unregulated, uncontrolled, and dangerous.”