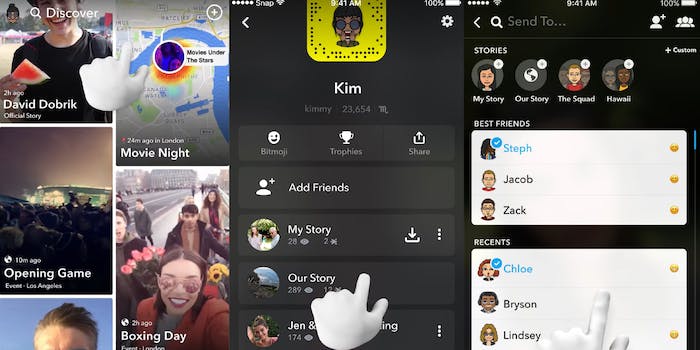 The new look will be released to all users in the coming weeks.

Snapchat today unveiled a major redesign of its app that aims to separate content shared by friends from professional publishers, a move the social network hopes will help jump-start its stagnant user base.

The overhauled interface now pulls all messages and ephemeral stories from friends to the left of the camera launch screen, with “close friends” owning a spot at the top of the page. On the right of the camera is the Discovery section, which will only include third-party content like sports, concerts, and events, published by Snapchat’s 70 media partners and creators. Snapchat remains focused on building its brand as a “camera company.” To that end, the updated app will still open directly to the camera interface.

The goal of reorganizing these existing features is to draw a line between friends and brands, or as Snapchat says, “separate the social from the media.” Before, Snapchat mixed photo and video stories from friends with content from publishers. While direct messages to friends had a separate page, Stories—the publicly posted videos and photos that last for 24 hours—have always been a jumbled, confusing mix of content derived from various origins. Now Stories from friends will be added to the left-hand personal messages page while brand stories will remain in Discovery.

Snapchat’s method for telling a friend apart from a publisher is simple. If an account follows you back, it’s considered a friend and gets sorted to the left of the camera. If the account doesn’t follow you back, its Stories belong in Discovery.

One particularly interesting addition is what Snapchat calls the “dynamic friends page.” Using algorithms, Snapchat will learn which friends you want to talk to and when you want to talk to them, making it easier to find your top friends and discourage publishers from following users back as an attempt to flood their “friend” list.

Snapchat hopes these drastic changes will protect users from fake news, which CEO Evan Spiegel says was created by social media because “content designed to be shared by friends is not necessarily content designed to deliver accurate information.” However, the changes could raise red flags for publishers that rely on people finding their content while flicking through stories published by friends. Snapchat says it will release new tools next year to help publishers turn a profit, though it didn’t specify its plans.

“While blurring the lines between professional content creators and your friends has been an interesting Internet experiment, it has also produced some strange side-effects (like fake news) and made us feel like we have to perform for our friends rather than just express ourselves,” Snapchat wrote in a blog post.

Coming off a string of poor earnings reports, Snapchat is in dire need of a win. The company’s growth has drastically slowed since the start of 2017, and its leap into hardware with Spectacles has been a financial disaster.

To make matters worse, Snapchat’s biggest rivals—Instagram and Facebook—have blatantly ripped off many of its best features with mixed success. Earlier this year, it was reported that more users use the Stories feature on Instagram than on Snapchat. But like with any major change, Snapchat walks a thin line, asking new users to come aboard and experience the difference while pleading with its existing fans to embrace the new look.

Users should start seeing major changes to the Snapchat app in the coming weeks, just in time for the update’s expected Dec. 4 launch.

Josh Constine, editor-at-large at TechCrunch, posted a demo video on YouTube that shows all the changes.