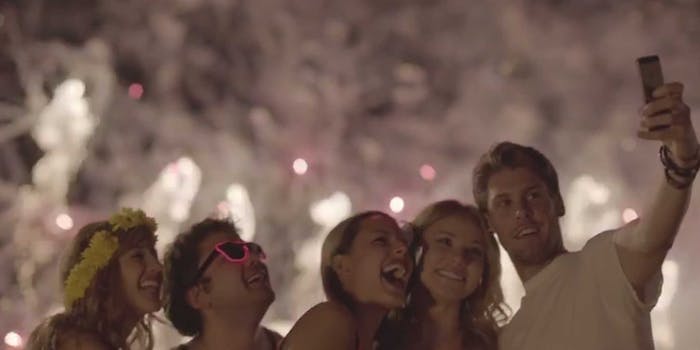 Snapchat launches Our Story, a feature for real-time group timelines

You can make massive timelines in real-time with Snapchat's newest feature, aimed at live events.

Snapchat will launch a “living timeline” for events this weekend. Users can post their ephemeral snaps to an event’s timeline, and view other peoples’ snaps. It’s calling the new feature “Our Story,” and will not require an update.

Snapchat said in a blog post that it wanted to build a “community perspective” with the new function: It will allow you to see what other people at the event are up to, plus a live feed for people who aren’t there. You don’t need to be friends with people to see their contributions to the event timeline.

This new feature gives Snapchat a collaborative edge and could prove helpful at large festivals and events, where users often want to more publicly post things. Appropriately, Snapchat will launch this feature at the EDC (Electric Daisy Carnival) Music festival, as seen in its ad. Snapchat will monitor the first event so the timeline doesn’t get too long, or contain any illegal snaps.

This isn’t the first app of its kind to offer collaborative timelines for events, though it is the first to be pushed out to so many users. Bonfyre and Banjo both allow users to create live timelines, though neither are ephemeral like Snapchat.

Two thoughts before we close: It’s interesting that as Snapchat dives deeper into group and public sharing, Facebook releases its own “disappearing” messages tool. And also, Snapchat’s PR push to make Our Story a concert-friendly app comes just after news of a drug stamped with its image and bearing its name is making the rounds.