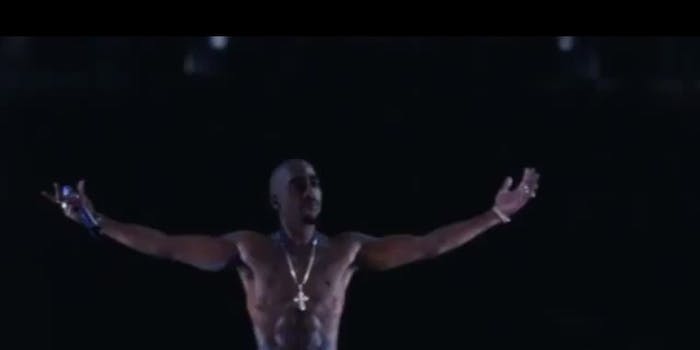 The future of virtual reality might not require clunky headsets.

When Coachella’s organizers decided to have a hologram of late rapper Tupac appear onstage during the 2012 dates of the music festival, they used a high-powered projector to create the uncanny “performance.” Now, in 2014, a startup called Ostendo is taking that kind of technology and shrinking it down until it’s small enough to fit inside your iPhone.

Ostendo is working on computer chips capable of projecting 3D holograms that will be tiny enough to fit inside a smartphone. The Carlsbad, Calif.-based company, which has raised $90 million from Peter Thiel and venture capitalists, is already prepping 2D project units for sale in 2015. But the company wants to start manufacturing a version of the chip with 3D capabilities for the second half of 2015, with an expected price of $30 a pop. The chip, which the Wall Street Journal describes as the size of a Tic Tac, can project an image on up to 48 inches of display; multiple chips working together can project far larger and more complicated images.

Founder Hussein S. El-Ghoroury has big plans for his company, which is currently 115 employees strong. He sees his chips becoming commonplace in all sorts of electronic displays.

This holds immense promise (which is probably why the the Defense Advanced Research Projects Agency is already awarding the company government contracts). But if this means an uptick in will.i.am holograms or ghoulish personalized Michael Jackson performances, I’ll hold Ostendo responsible.