New smart skin will give artificial limbs the sense of touch

The new skin is primarily made of polydimethylsiloxane, or PDMS, a flexible, transparent silicone material.

Researchers in South Korea have developed a “smart skin” that could give people with prosthetic limbs a sense of touch. In its current form, it doesn’t look like much more than a thick layer of plastic draped over a robotic hand, but it’s implications for the future of prosthetics could be much more significant than its appearance would suggest.

The artificial skin can process pressure, temperature and humidity, making it suitable for a range of real-world situations including handshaking, typing, gripping, and sensing dry or wet surfaces. The smart skin even has features built in to make it feel more human-like, including a heating system to make it as warm as living tissue and a similar elasticity and texture to that of human skin. “For prosthetic devices and artificial skin to feel natural, their temperature profile must be controlled to match that of the human body,” the authors write in their paper, published Tuesday in Nature Communications. 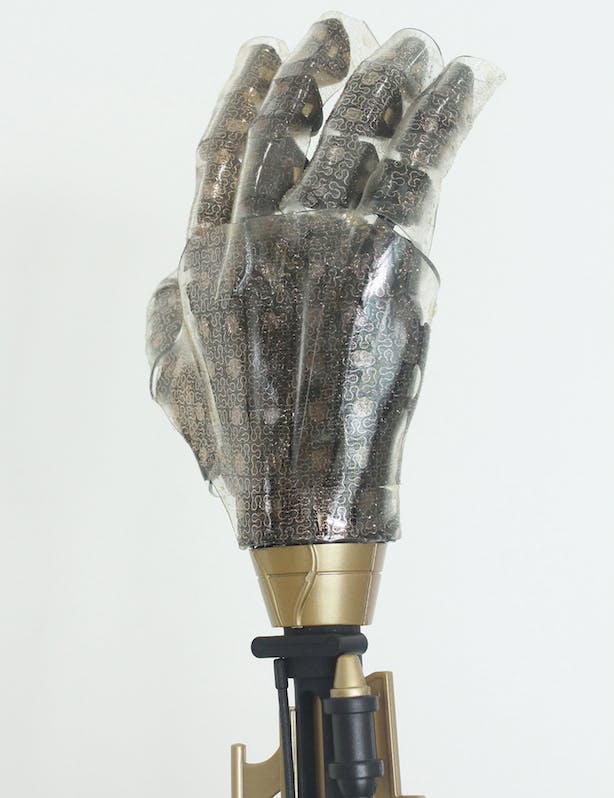 The new skin is primarily made of polydimethylsiloxane, or PDMS, a flexible, transparent silicone material. Tucked within the PDMS are silicon nanoribbons, that respond with an electrical impulse when touched to provide a source of feedback for the user. Where greater flexibility is required, such as around the wrist, the nanoribbons are grouped in a somewhat loose arrangement to allow movement. At the fingertips, where flexibility is less of an issue and maximum sensitivity is desirable, the nanoribbons are grouped together as tightly as possible. 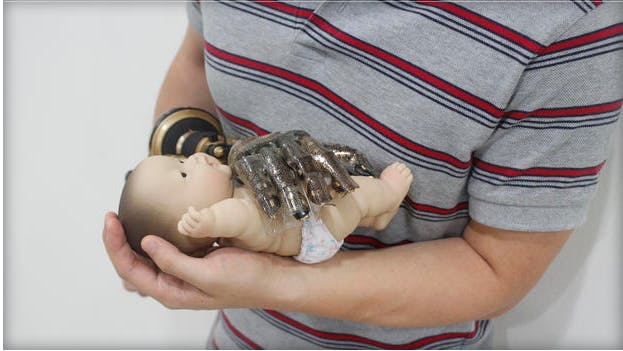 The humidity sensors in the skin were tested on diapers, and were able to determine which were wet and which were dry. Eventual wearers of the skin will surely be glad to know they can perform this test, but might want to leave actual diaper humidity tests to a sense other than touch.

In another odd but telling experiment, the creators tested the skin’s ability to hold a consistent 98 degrees Fahrenheit by placing the hand on a plastic baby doll and measuring how much heat was transferred to the doll.

Kim Dae-Hyeong, one of the authors of the study, says that the technology has been patented, but that much work remains to be done before the artificial skin hits the market. Nevertheless, the smart skin could be a major step in the continued development of prosthetic limbs, allowing their users to once again more fully interact with their surroundings.